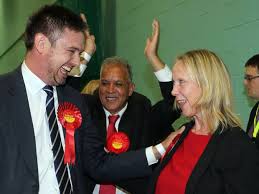 Heywood and Middleton is, by any reasonable standard, a safe Labour seat. But perhaps for not much longer – perhaps not even in 2015. Labour held the seat yesterday, but only by just over six hundred votes. In the 2010 general election UKIP gained 1,215 votes there, not even enough to keep their deposit. Yesterday, they got 11,016, a nine-fold increase.

There was a lot of talk on the ground apparently that Labour chose to focus the messaging on the NHS when what everyone wanted to talk about in the constituency was immigration. Liz McInnes, the new Labour MP for Heywood and Middleton, said in her acceptance speech that her victory was an endorsement of Ed Miliband’s NHS plans. As statements demonstrating the “out of touch nature of the Westminster parties” go, this was a doozy.

Labour’s tactic thus far with UKIP has been to mostly ignore them. It’s too tricky a terrain and besides UKIP hurt the Tories more, so perhaps their rise is a temporary bonus, this thinking goes. But the Heywood and Middleton by-election result tears that hypothesis to shreds. UKIP have demonstrated that they can win over voters in Labour heartlands and Labour need some way of dealing with UKIP that is much better than what they’ve done up until this point. And fast.

But here’s the thing – they won’t. Excuses will be made, straws clutched at. It will be pointed out that Labour’s vote share remained about the same while the Conservatives and Lib Dems fell substantially. This wholly misses the point. If UKIP gain votes in the north off Tories, Lib Dems and previous non-voters much more than from Labour, this is still a massive problem for Ed Miliband’s party. There are whole sections of the country where Labour haven’t had to put any resource into keeping seats for generations. However it happens and whomever they pull votes from, if UKIP become a formidable force in the north this means that Labour will have to divert resource from other parts of the country in order to hold previously impervious seats. They will also need UKIP-considered messaging specifically designed to fight these areas, something they do not have at present. They can either try and embrace UKIP issues in Labour friendly language, or denounce them in left-liberal terms, but they can’t go on ignoring them completely.

So will UKIP take a load of seats off Labour in the north of England next May? If you asked me a week ago, I would have said it was impossible to do in 2015; that perhaps come 2020, UKIP could build on a bunch of second place finishes up there from the previous election. But after Heywood and Middleton, I don’t know. The combination of UKIP momentum and Labour’s desultory approach to the problem makes me think again.