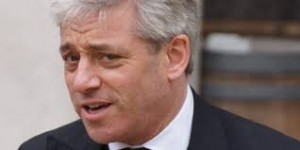 The Speaker of the House of Commons seems to fill lots of people in Westminster with outright bile these days; they call him arrogant and in extremis say that the Rt Hon Bercow is trying to start some sort of revolution from the inside. His list of enemies is growing all the time, particularly with his latest ploy of bringing in Carol Mills as Commons Clerk, an outsider who was interviewed for the position and is Australian to boot. Jobs for the boys being junked by giving Westminster’s plum job to a foreigner – what has become of the Empire, dear boys? A whiggish turn that is enough to make one 23 skidoo. The bloke who was “supposed” to get the gig is now threatening to sue for gender discrimination as the job went to a woman. I was trying to come up with something witty to follow that last sentence, but it is so ridiculous nothing will suffice.

Bercow’s decision to try and give what is an important job to the person who was best qualified to do it should be applauded, not frowned upon. The job has gone to whomever was deputy since it was created in 1360, so perhaps a fresh approach was due. Putting aside the Mills debate, I like the way Bercow handles his time in the chair, particularly during PMQS. The guy takes no shit and is incredibly unbiased – the Tories only accuse him of partisanship because they figure as a Conservative MP to start with he should be on their side mostly and resent that he isn’t.

I should disclose that I thought Michael Martin was an absolutely awful Speaker, and was indicative of the wrongheaded approach that has led to Bercow being vilified. Why is active disinterest and an inability to stay awake during the sessions seen as good attributes for the Speaker to have? The fact that Bercow wants to shake things up seems to me something we should encourage in whomever takes the role next. Which might be sooner rather than later, as the age old tradition of the seat in which the Speaker is standing not being contested by the other parties is under threat, such is the dislike Bercow inspires. There’s also open rumours that if the Tories are in government again post-2015 they’ll try and oust him.

Again, it’s not so much the fate of Bercow that really concerns me (although it does – as I say, I do think he’s a good Speaker), but rather the approach to the chair itself from parliamentarians. We hear all the time about how Bercow is trying to use his position to unduly change things, but do MPs ever reflect when they’re railing against him that they are effectively trying to use their positions to remove someone who takes the Speaker role seriously? Assumedly to replace him with another comedy, past-it pensioner who has no idea what they’re doing? That seems to me to be a much more egregious betrayal of the unwritten constitution than anything John Bercow is trying to do.

So beware the plots to undermine the current Speaker. However they are presented, something sinister lies behind most of them.