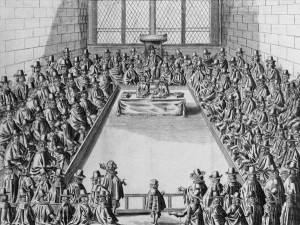 I remember being at an Alex Salmond speech in London a few years back. It was post May-2011, maybe autumn 2012 or so. I recall being impressed with his oratory skills, but that’s not what really sticks in my mind about the event. What I’ll never forget was a bloke very close by me in the crowd sticking his hand up to ask a question. He looked like the type of chap you might avoid in a pub if at all possible. An air of low level belligerence hung around him, and you knew it was permanent somehow, not the result of proximity to the Scottish First Minister.

He told us all he was from the Campaign for an English Parliament, and there something about the question that he asked (I can’t recall what it was now exactly) that was overlaid with heavy nationalist overtones. I’m pretty sure there was a mention of the English essentially paying the Scots way, that sort of thing. Salmond handled it deftly, saying he agreed there should be an English parliament – in an independent England, of course. I recall thinking, “Here’s two guys I’m never going to agree with on much”.

Only, of late, I’ve found myself starting to agree with both, at least on the question of an English parliament. I bring up the chap at the Salmond speech, really, because he represents what a lot of people on the Left think of when they imagine someone who campaigns for an English parliament: slightly scary, definitely right-wing, possibly far-right, with more than a hint of UKIP-ishness about his person. But when you stop and think about it, an English parliament should have a lot of appeal for both liberals and those on the Left.

For a start, one of the shibboleths of liberalism, electoral reform, would be achieved in a stroke. You would have every part of the country voting in PR elections, and most of the functions of government would be decided under a PR system (I’m making assumptions about what would be devolved to an English parliament, obviously). Decentralisation and localism would be greatly aided as you would have devolved a huge amount of things away from Westminster. As for “our discredited political system”: you couldn’t shake it up in real terms any more than this in one go.

As for left-wing issues, it is assumed for some reason that England would vote Tory forever, or some sort of UKIP-Tory horror-show. Democracy doesn’t work like this, and besides this whole “the Scots are more left-wing than the rightie English” crap is just that. Labour always had majorities under Blair, and pretty sizable ones at that. The Scots are anti-Tory, not anti-Right, and there is a significant difference there. England under a devolved parliament would probably be able to think about its own needs, its own public services with a lot more clarity.

I think the big problem with devolution thus far is that if you do it for a few places and not the rest of the country, you’re going to end up with the rest of the country feeling a little short changed. This is inevitable. There are ideas on the table as to how to rectify the current situation. Some are saying devolution to regions within England. Some are saying English Votes for English Laws. Both are a fudge that will not ultimately work.

I’m not saying there should definitely be an English parliament. But I’ll tell you what: I’m starting to warm up to the idea, something I wouldn’t have thought possible a few years ago.