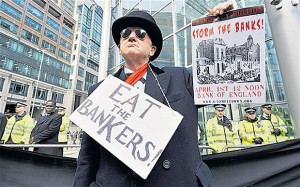 Many on the Right of this country are desperate to have an In/Out referendum on our continuing membership of the European Union. To be fair, there are also many on the semi-Stalinist, non-internationalist Left who would like the same thing. But mostly the pressure for such a referendum comes from those on the Right. Late last week, I wrote an article on why I feel direct democracy, in a word, sucks. Take the following as an elaboration on that theme, using as a test case scenario a referendum on banker’s bonuses.

We hear all the time from direct democracy advocates that we must “listen to the people”. Their way of listening to the people appears to me to centre around the Westminster bubble deciding what people really want, followed by making them listen to tedious slogans for months on end about a topic they don’t care that much about before having to go to the polls and vote just to maintain the status quo, feeling annoyed the whole time. However, on this model of “listening”, one has to say the clamour to do something about a cap on banker’s bonuses has been as loud if not even more vociferous than a call for an EU referendum in this country. It’s just come from the other side of the political spectrum.

So imagine we were to call a national referendum on capping banker’s bonuses at a maximum of £100,000 per annum. I can hear the arguments from the Right already: but if we capped bonuses at that amount the city would collapse within a week, as jobs on the international market flooded to countries that didn’t have this ceiling in place. It’s far too low, they would add. But one hundred grand sounds like a fantastically high amount to someone on £20,000 a year. But they don’t know anything about international finance, the Right would say. They probably know as much about international finance as they know about the actual pros and cons of EU membership. Which is why we shouldn’t have a referendum on either.

People are angry and looking for scapegoats, and the EU functions as a good punching bad for some, while for others banker’s bonuses is a pretty handy target. If either were put into play in a referendum and a vote for change won, the country would almost certainly face horrific hardships not foreseen in any way by those who voted “Yes”. This is the principle problem of direct democracy – it assumes more knowledge and more interest in detail than in reality exists in the minds of the public.

So next time a right winger demands an In/Out EU referendum, shout back that we should have a referendum, on the same day, on capping banker’s bonuses at £100,000 per year. Then sit back and see what they have to say next.