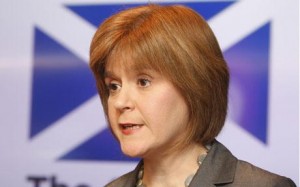 Nicolas Sturgeon, in her first speech as leader of the Scottish National Party, went in hard on the Auld Enemy. By which I mean, Labour. She said the Labour Party had “lost its soul” by backing a No vote in the Independence Referendum. An interesting take on things; despite its rather liberal, shall we say, take on history, almost certainly an effective one.

Of course, in the same speech Sturgeon did assure Scottish voters that if the SNP held the balance of power after the next Westminster election, they would “never, ever put the Tories into government”. So as much as they hate Labour the SNP realise that Scottish politics demands that from their perspective a Lab-SNP deal of some description could be a goer. But how does Labour feel about such a prospect?

I think a lot of English Labour activists would much rather do a deal with the SNP than with the Lib Dems, if those were the choices available. This feeling I suspect gets stronger the further south within the island of Britain you travel. But as many southern Labour activists won’t really feel in their guts, the Labour-SNP rivalry is one of the fiercest in all of European politics, a real, deep seated hatred, one that has only deepened post-Indy ref. Post-May 2015, having potentially denied Labour a majority by having taken a bunch of safe seats off of them in Scotland, it is hard to imagine the leadership of Labour being up for a round of pleasant coalition talks with Sturgeon and co.

Also, the SNP would drive both a hard bargain in terms of what they wanted out of any deal, even a supply and confidence arrangement, and would be looking right from the start to continue with their proven formula: that of being in government and opposition at the same time. Whether they could pull that off while being in power in Scotland and in coalition down south, I have no idea. All I would say is, given what we’ve seen over the last decade, I certainly wouldn’t put it past the SNP.

So in short, the whole thing would be a complete nightmare for Labour. The Lib Dems went into the current coalition desperate to make it work; the SNP would be looking to sabotage Labour right from the get go. I can’t imagine any rose garden moment involving Ed Miliband and Nicola Sturgeon, let’s just put it that way (actually, I have difficulty imagining Miliband as Prime Minister at all, but let’s put that to one side for now).

I also think , everything else I’ve just said aside, that Labour doing a deal with the SNP would be fatal to their vote in Scotland for at least a generation, perhaps more. By working with the Nats, Labour would be affirming their enemy’s message: go ahead and vote SNP, as you won’t so much be depriving Labour of a majority and letting the Tories in, as simply be giving succour to a junior partner who will stand up for Scottish interests first and foremost. If Labour gave the SNP a platform from which to prove this theory to the Scottish electorate, they would be saying goodbye to getting a majority anytime in the near future.