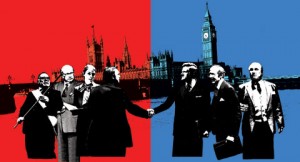 James Graham, the esteemed playwright, wrote a piece of drama that I’m sure everyone who is in any way interested in politics has at least heard of entitled “This House”. It follows the travails of the Labour Party under a razor thin majority in the mid-1970’s. Having said this, I wonder how many Labour and Tory backbenchers have seen it after what I encountered this weekend.

I read a piece by Mehdi Hassan on the Huffington Post about how Labour might be better off pursuing a minority administration rather than even enter into coalition talks with the Lib Dems should Labour become the largest party in a hung parliament following the next general election. Large sections of it showed mass delusion by some MPs. Because if you think Callaghan had it tough in the 70’s working with the tiny majority, that would be political paradise next to what either party would face trying on a minority for size.

The Tories are no better on this. A large portion of the 1922 Committee have gone around acting like the Conservative Party won in 2010, as if Cameron took the Lib Dems on board on a whim. What really interests me is what a lack of understanding of basic parliamentary procedure this demonstrates from our members of the Commons. Because if you have a minority administration, you do not have enough votes to get anything whatsoever through. Even confidence-and-supply is not set in stone. You are not a real government in any sense.

If Labour or the Conservatives decided to go it alone in a minority setup, two factors would be important to grasp. One, you would not be depriving the Lib Dems of power, you would be giving the party an unbelievable amount of power. Cameron, to his credit, realised this straight off following the 2010 election. Because instead of trading the smaller party the right to sit at the big table for an agreed agenda, you have to go to them Bill by Bill. And it is always in the smaller party’s political interests to say no.

Another factor for Labour if they end up in this situation is that they will have to continue many of the Tory cuts so reviled by their members and followers. Within a supply and confidence deal, there is no one to shift blame onto for this; at least if there was a deal with the Lib Dems in government, the smaller party could be used as cover.

But the second factor, and the biggest nightmare for minority governments, is the fact that you are dealing with a public that largely doesn’t really understand even the basics of how parliament works. So whomever is Prime Minister will not get cut any slack for not having a working majority. They will be blamed solely when government seizes up and nothing gets through. Again, the Lib Dems could ask for the sky on every Bill with the knowledge that saying no would make them look good to an annoyed electorate. Every refusal would make the Lib Dems look defiant, which in this day and age people tend to like, and the Prime Minister look weak and indecisive. Completely unfairly, but this is exactly what would take place.

Just so we’re clear, I’m not saying this because I’m desperate for the Lib Dems to belong to another coalition at all costs anyhow. I’m happy for us to do so, but only if we get what we want out of the deal. If not, let whomever is then forced to govern the country wither on the vine, with the Fixed Term Parliament Act meaning they can’t even call another election whenever they want to as they would be wholly reliant on when the rest of the house wished for it to happen. A Prime Minister without a majority could be forced to sit in Number 10, a sitting, lame duck, just waiting for the other parties to put him out if his misery. I think both big parties should start being less blasé about the whole thing.