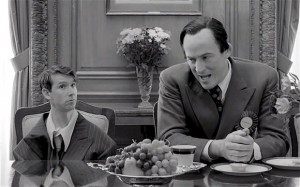 So most of you will have seen the Labour Party’s party political broadcast last night. If you haven’t, here it is. If you don’t want to waste four minutes of your life, I’ll summarise it for you: it’s four minutes of Clegg bashing with a scintilla of ineffectual painting-the-Tories-as-moronic-toffs crap. Last night, as I watched it, I mused that poli sci students may one day point to this PPB and say that this was the moment the Labour Party jumped the shark. Lest you think this is just the wailings of some offended Lib Dem, there is an excellent article on Labour List from Emma Burnell talking about how she’s not a fan and describing the PPB she would have liked to have seen (which at least would have got some of Labour’s key messages across). The Mirror poll asking people if they liked the broadcast was 60-40 against last I checked.

But is it really that bad? And more to the point does it really prove anything is seriously wrong with the Labour Party, as Dan Hodges and others suggest? So the grassroots of the Labour Party and the media don’t like, I can hear the argument going. The target audience was all those disaffected Lib Dems who are still wavering on whether to vote for Ed or not come 2015. If that is the case, and it seems to be the crowd Labour were trying to woo with this gigantic televisual shitball, then we should all start preparing for a Tory majority come May 2015. Because on this evidence the people who are running the Labour Party appear to have no idea what they are doing.

I have said this before, and now I’ll say it again: Labour folks really don’t understand Liberal Democrats, and I include current and former members of the Lib Dems in that description. This works both ways, don’t get me wrong; the culture of both parties, which people who haven’t experienced both tend to assume to be rather similar, are like the proverbial chalk and cheese. As a result, Labour still haven’t figured out that the route to getting leftie Lib Dems solidly in the Labour camp doesn’t lie in bullying and harassing these people. The Labour Party, which most of these people they are targeting still have major beefs with over Iraq, over Blair’s attempted destruction of civil liberties, continues to present itself to this audience as a leering bully, telling all the leftie Lib Dems they’d better vote Labour if they know what’s good for them. This will continue to backfire as long as it is pursued. Ironically, that is how this silly broadcast was produced in the first place; internal polling by the Labour party shows a lot of Lib Dems who earlier in the parliament said they’d probably vote Labour are now not so sure. They might stay at home. Or vote Green. Or even Lib Dem again.

In summation, Labour people want to see Clegg shrunk to the size of a mouse and then devoured by Larry the cat. Most leftie Lib Dems find this idea unappealing. Basically because the whole thing is so tribal, the absence of which made them join the Lib Dems in the first place. Labour people hate Nick because they feel he betrayed their religion; leftie Lib Dems feel the party isn’t going the direction they like and they don’t want to be in government with the Tories. One is a sort of carnal hatred, one is reasoned disappointment. It is analogous to telling a young person who failed to get into Oxford University that they should burn the city down, then find the Dean, rip his heart out and eat it in front of his children.

If Labour top brass really wants this group of disaffected Lib Dems to vote Labour, try this novel, new concept: give them solid reasons to vote for the Labour Party at the next general election. Some policies that will appeal to this group would be a good start, things such as a renewed commitment to civil liberties (with a renunciation of the Blair era policies), a solid nod to Britain staying in the EU, as well as some ideas around electoral and constitutional reform. But wait, these aren’t things most Labour voters care about, I hear Victoria Street echo. And finally, you’ve got to the crux of the matter. The Lib Dems and Labour are two distinct parties, with two distinct sets of priorities. If none of what I just listed interests you guys, guess what, perhaps this group of disaffected Lib Dems are not your route back to a working majority.

Sad thing for Labour is what would work towards getting leftie Lib Dems solidly in their bracket, and at the same time work for all of the other groups they are trying to align together to put Miliband in Number 10, is simple: tell the nation what you are about. What you would do as a government if the people let you get there, and stick with it for more than fifteen minutes. They could have used this PPB to tell that story, or at least a part thereof. Instead they used one of their key national broadcasts made available to them to bash the leader of the third party for four minutes ineffectually.