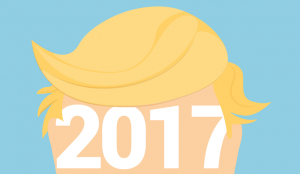 The following is a small excerpt from my book, “2017”, available now in digital form and paperback.

How much is it the fault of the Left that the rise of the New Right has taken place?

In some sense, it is entirely the fault of the Left. After the 2008 crash, the Left became bizarrely complacent and thought that the major theoretical defeat that neoliberalism had just suffered would automatically mean victory for themselves. It seemed to have never occurred to them in 2008 and 2009 that there would be some very nasty elements of the financial crash and its after effects that would offer opportunities to a different segment of the Right. While this was understandable to some extent in 2008, it is unforgivable that the Left still continued to spin these fantasies into 2010, when we witnessed cuts marchers likened to the Suffragettes by Ed Miliband as a prominent for instance. Even more unforgivable is that the Left not only carried on deepening these flights of fancy into 2016, through all of its considerable defeats in those eight preceding years – at least in Britain and continental Europe – it is still holding on to them even now, stronger than ever, post-Trump becoming elected president of the United States.

What could the Left have done better during the last decade?

The major challenge facing the Left post-2008 was coming up with a new way of doing things that would have solved most of the problems neoliberalism had created in the run up to the crash. It had to invent something both feasible and attractive. It failed rather magnificently to do so, in a way that is mind blowing even today. Instead of providing any solutions, the Left became all about what they are against as opposed to what they are for. They railed against budget cuts without saying how they would keep public spending going themselves, scared of proposing higher taxes, instead becoming stuck with a narrative that went “we’ll do everything the Tories are doing just in a nicer and at the same time more incompetent manner”. The fact that this failed isn’t much of a shock. Nor I suppose was the Left finally breaking down and – in total desperation – picking up the one thing from the past remaining for them to still theoretically cling to: a full-on embrace of socialism. Although as I’ve already covered, in most instances this embrace of socialism really was a matter of semantics only.

Meanwhile, the Right managed to cling to the idea that the Left had overspent and now cuts had to be made to keep everything going. The Left thought this would fail sooner than it did. Even when this narrative did fall through, the emergence of the New Right saw another explanation created for why things are so bad for the struggling lower-middle and working-classes of the western world that has washed in the continuing absence of any left-wing narrative that makes even the slightest modicum of sense. This New Right narrative revolves around protectionism and nativism in the form of immigration limitation or even elimination.

What can the Left do now to improve its lot?

It has two broad options if it wishes to regain power. One is easy but unappetising for a lot of its supporters; the other is incredibly difficult. I’ll begin with the easy one.

This easy option involves the Left essentially accepting that the war is lost with the New Right in terms of values. As a result, it not only jettisons all social liberalism, it turns vocally against this value set. This would include rejecting feminism, all forms of identity politics, most notably gay rights, the works. The Left would then become nativist and protectionist in the extreme – it would have to shout very loudly on this point to be taken seriously, after all. It would become vociferously anti-immigration in the process, embracing patriotism and indeed, even English nationalism, again even stronger and more obviously than the New Right is doing currently.

Having done this, it can then claim the economic victory has been won by the Left given the Right have abandoned austerity and to a large extent free trade. Neoliberalism has died, the logic goes, and nation states must look inwardly to provide for their citizens once again. This will require a bigger state and a more socially conservative society in order to make it all work. But if everyone works together, society can become strong again. The Left can argue that liberalism of all forms, both social and economic, have weakened society and allowed the rich to prey upon the poor. Only through a gigantic coming together can society become more equal and more vibrant once again, goes this narrative.

This could work electorally because it would allow the Left to argue for societal solidarity more convincingly than the Right ever could. The Right is only getting away with it for now because the Left has given up trying to uphold any kind of communitarian values whatsoever. This route also negates all of the factors that currently stop most people from voting for a left of centre party: perceived lack of patriotism, pro-immigration policies, a religious adherence to identity politics, a prioritisation of minority interests over those of the majority, a clinging to liberalism of every form available excepting economic liberalism, this last item of course making zero sense when looked at as a package with the rest.

This new position would obviously alienate a lot of young Labour supporters but would allow the party to regain older voters who are deserting them – and older voters are a lot more statistically likely to vote. It would also alienate people in places like Islington – reservoirs of liberal left group think – but would mean Labour could possibly recapture working-class votes, particularly in the north of England where they are currently slipping away from the party’s grasp.

It is worth considering, before I as a liberal proceed to demolish this path for the Left as a terrible idea, that when singing the praises of the “spirit of ’45” many on today’s Left fail to understand just how much social conservatism went in to making that all work. It is also worth noting that many within Labour have been arguing that the Left should take up a version of the anti-liberal programme I’ve just outlined above for many years now – albeit in a slightly squishier and less threatening form. The whole Maurice Glasman Blue Labour movement never caught fire because the Left was not willing to let go of liberalism, really, if one was being totally honest about it all. In fact, the problems that Blue Labour faced are a good example of why the “easy” programme that I have just now proposed, while being of a sort that would probably work in terms of getting voters to go left again across large swathes of England, will never be taken up by the organised Left in Britain. Without them really understanding all of the implications involved, the Left has become deeply liberal on most social issues, while also becoming deeply illiberal on economic and indeed other issues – freedom of speech, for instance. It is this paradox at the centre of everything the current Left thinks, says and believes that makes Labour unelectable in the UK for the time being. The party must resolve this paradox one way or another – or die out.

This brings me now to the second, much more difficult, but also much more rewarding path for the Left. Namely, embracing the fact that liberalism is non-detachable as a value set for the group of people who identify as the majority of the 2017 British Left; furthermore, that abandoning liberalism may help the Left win votes in the here and now but may damn them in the eyes of future generations, as the young become ever more liberal in every sense of the word. If this second, more ultimately rewarding route is taken by the Left, then understanding what that means for the future direction of travel is the next, vital step.

If you’re interested in reading more, you can get the book in digital form and paperback from Amazon.