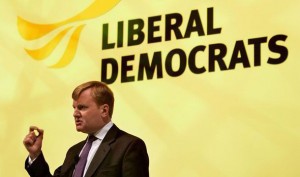 There has been pressure applied on Nick Clegg to step down as leader of the party following the dismal display in the locals, which was followed by the even worse one in the EP elections. I’ve already written about why I think Nick’s still the man for the job and nothing has changed my mind over the last day or so. But in talking to people on the subject, I have come across one interesting fallacy repeatedly: people assume that a new leader would get the same level of attention and therefore name recognition as our current leader. They seem to forget that the only reason most people in the country know who Nick Clegg is comes down to the fact that he’s the Deputy Prime Minister.

Remember how hard it was for Paddy to break through into the general consciousness? Or Charles? It is tough for new Lib Dem leaders to have an impact. The media is relentlessly focused on the two major parties. That only changed for Nick as a result of the coalition. A new leader would not have this opportunity presented to them.

For a start, if Nick steps down, there are two options open – one is to fold the coalition and the second is for Nick to remain as DPM while the new leader does their thing on the side lines. The new leader being DPM, you will note, I have not put amongst the possibilities. That’s because the Tories would never accept this and would prefer to carry on as a minority administration and fold the project if Nick wasn’t part of it. So this new leader would not be in government and therefore would definitely not get the same level of publicity that would be available if we were. Therefore, putting out our message out would not get easier – it would get considerably harder.

I’ll give you an anecdote from just this morning to put things into perspective. I work in a very political environment. Mostly with Labourites or Greens, but people who pay a lot of attention to politics nonetheless. I said to one of them today that I thought that Vince wouldn’t be leader if Nick stood down now, that I thought it would be between Tim Farron and Jeremy Browne. She had only the vaguest idea of who either of them were and her memory had to be thoroughly jogged. Extrapolate this to the general public, where a sizable minority of people in 2012 struggled to recognise Ed Miliband from a photo, after he had been leader of the opposition for eighteen months.

Our one shot at redemption is to try and continue making the claim that we did some good things while in government and that if we were to be given the opportunity again, we would do even more good things. To try and dismiss the whole thing as nothing but a colossal error could signal the end of the party. We live or die on our record in government.

So to those who think that the future would be bright if we just got Tim Farron or Vince Cable in because suddenly everyone would tune in to our messages, is forgetting the pre-2010 past while simultaneously pining for it. If Nick stepped down, the media would pronounce us dead and buried, and with the Tories in a minority situation everyone would also announce that coalition government had been proven not to work as well. And our leader, whomever they would be, would be speaking in a vacuum for at least the next few years.