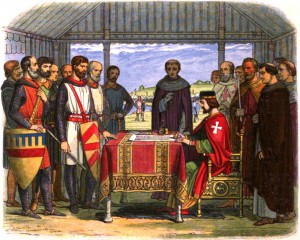 Basically, a bunch of politicians pile into a room together to discuss the problems facing the UK constitution. Given they are all from different parties, with very different opinions on how the constitution should be changed were it ever to be changed (with most of them feeling like any change whatsoever is a bad idea), they obviously can’t come to an agreement. The whole thing then moves onto phase two, which involves getting members of the public involved with the debate. After the nutjobs who turn up to this thing come out with the craziest ideas in the universe, this is then used by the original politicians involved in phase one to demonstrate how stupid the idea of changing the constitution in any way whatsoever is.

The whole cause of constitutional reform is then set back an entire generation, perhaps more. The cycle continues (see the year 2055 for more details).

I’m being as cynical as possible here, but given where the debate on constitutional reform in the UK is at present I feel this tone has become necessary. After the AV referendum and the House of Lords reform fiasco, those who think that constitutional and electoral reform is still important need to take a long hard look in the mirror. Because asking the public to buy into arcane concepts such as a constitutional convention is not the way to go.

Some people who crave change think that the result of the next general election will stimulate desire for electoral reform. They are fooling themselves with this notion. If the Tories ended up with the most votes and yet Labour had more seats and formed the government, this would not cause the Conservative Party to embrace electoral reform. Trust me, I have personally spent more time than anyone in the country discussing electoral reform with Tory MPs over the last five years, and I can’t stress to you enough that that this is the case. They will simply see the reformed boundaries as the answer, as they have done all along. UKIP getting stiffed by the electoral system (which I think they will), seeing them get a paltry number of seats for say, 10% of the popular vote, will not turn UKIPers into rabid electoral reformers. They as a party will remain agnostic on the subject.

Meanwhile, the Left will be able to point to First Past the Post and say that at least it kept UKIP out of being in a position to form a government with the Tories. So in that sense, I suppose the electoral reformers are correct. The next election could have an effect on passion for electoral reform in Britain: it could make even more people anti the prospect.

Having been negative thus far, I will go out on a positive note. PR for local government looks a real possibility after the next election, as the Tories are softening to idea (having seen that it is in their electoral interests, both long and short term). The House of Lords is getting massive and after next year’s dissolutions list will be even more swelled. Something will give on this sooner rather than later. If I was a constitutional and electoral reformer, this is what I’d focus on. Not a constitutional convention that will go nowhere and may even hurt the cause it is attempting to further.