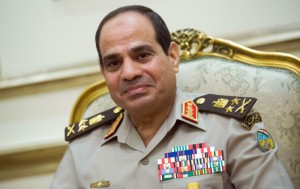 The newly crowned president of Egypt recently took time out of his busy schedule posing in sunglasses to address the nation’s General Assembly.

“In the long history that goes back thousands of years, our homeland did not witness democratic transfer of power. Now, for the first time, the President-elect shakes hands with the outgoing President, and together they sign a power transfer document in an unprecedented occasion.”

Yes, one military stooge handed over the reins of power to someone who had a whole lot more power already, and who furthermore would have crushed the incumbent without hesitation like a Carthaginian prisoner being sat on by an elephant had there been any resistance whatsoever; what a proud moment in the history of democracy. Really, it’s a bit more Kim Jong-Sun passing the baton to Kim Jong-il than Washington and Adams, if one were to be completely honest.

When I was a teenager in a godforsaken portion of the Canadian west, I was exposed to a lot of terrible bands. There was one particular rocking teen combo, the bass player of whom I later became friends with, who called themselves Major Force. They had precisely one song, which was entitled (what else?) “Major Force”. Their live shows consisted of them playing this one tune over and over again; faster and then slower; sometimes done as a waltz or with only a marimba as backing; the bossa nova version was a rare and therefore anticipated event. The lyrics were pretty straightforward:

How they were never signed to a major label haunts me to this day. They came to mind this week as I watched the man who just received 96% of the vote in Egypt declare himself the John Adams of the 21st century. Because he’s repetitive and mostly the same old and yet portrays himself as fresh and new. There’s also probably something about corpses in there but I’ll let it go at that.

Latching onto something a little closer to Egypt for comparison, El-Sisi is more like a pharaoh, or at least that seems to be what he’s aiming for through the medium of sham democracy, the vehicle for all aspiring eternal rulers these days.  At least during the Sixth Dynasty, you wouldn’t have been forced to go and vote in an election that was already a foregone conclusion.

The problem for Egypt is this: a lot of liberals fought to end the repressive regime of Mubarak. They won and a revolution took place. So there were genuine elections for the first time since 1950. And then the liberals did what we liberals always do – we fought amongst ourselves while the conservatives really got their shit together. This is how Egypt ended up with Mohammed Morsi and the Muslim Brotherhood running the show. For a little while anyway. Then the military did what it had already done once during the revolution and kicked the man in charge out of power. Only this time they decided to hang onto it for keeps.

Of course, in theory what Egyptian liberals should have done was to try and bring down Morsi using civil society and the democratic process. Problem with this is, Egypt has no civil society, not by any western standard. So I can see how a military overthrow sounded appealing. However, now Egypt is in no better a place than it was pre-revolution, and could be said to be in an even worse one. Countries run by their militaries always, but always have sad stories. There isn’t a single positive example I can site. Looking at military dictatorships, one sees no bright sparks as examples. And Egypt is a military dictatorship in all but name.

The conclusion to all this is that Egypt risks becoming the Arab Spring version of Major Force, doing the same thing over and over again and convincing themselves that because of minor changes it’s actually doing something completely different each time. It didn’t work for Major Force and won’t work for the most populous Arab nation on the planet.