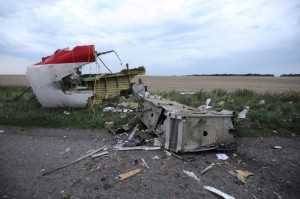 A picture taken on July 17, 2014 shows the wreckages of the malaysian airliner carrying 295 people from Amsterdam to Kuala Lumpur after it crashed, near the town of Shaktarsk, in rebel-held east Ukraine. Pro-Russian rebels fighting central Kiev authorities claimed on Thursday that the Malaysian airline that crashed in Ukraine had been shot down by a Ukrainian jet. The head of Ukraine’s air traffic control agency said Thursday that the crew of the Malaysia Airlines jet that crashed in the separatist east had reported no problems during flight. AFP PHOTO/DOMINIQUE FAGETDOMINIQUE FAGET/AFP/Getty Images