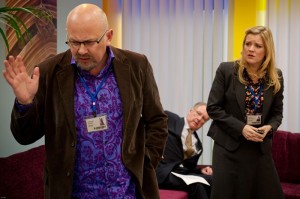 Things, as you may remember, were reasonably rosy at the start of the Coalition. The Tories were so happy to be back in government and the Lib Dems so pleased to have made it back after several generations hiatus that crucial differences between the two parties were swept aside as much as possible. This sometimes had strange results. One of which was my soon to be wife and I taking the train to Kendall Rise to attend Steve Hilton and Michael Gove’s joint birthday party in late August 2010.

Steve Hilton was Cameron’s head of policy in Number 10 at the time. He was subsequently parodied in the fourth series of The Thick of It as a slovenly dressed, new age catch phrase spouting hippie. The real Steve was actually much more interesting than the caricature – and much funnier as well, both intentionally and unintentionally. I actually really liked Steve, despite our divergent political views. Then again, I never had to work with him.

Steve Hilton and Michael Gove met at Oxford and have been good friends since. There appears to have been some ups and downs, for instance when Gove got selected to contend the Surrey Heath constituency for the Conservative party, the seat he still holds, over Steve. But their birthdays are a day apart (August 25th and August 26th respectfully) and the joint birthday gathering had become a staple event in the Tory calendar. I was eagerly looking forward to getting a look in at a whole new world. I didn’t really know many Tories and had certainly never been in a whole room full of card carrying members before.

When we arrived at Kendall Rise station to walk to Steve’s place it was chucking it down outside, biblically. Bereft of other options, we ran for it. By the time we arrived at the house my fiancée and I were both soaked through. Steve took me upstairs to his bedroom to try and find me a T-shirt to wear as I got out of my wet clothes. He had to flip through about ten of them before he found one not bearing a Conservative party related insignia on the front of it. “Iain Duncan Smith for Prime Minister!”, that kind of thing. I think I ended up with something like “Hawaii Rocks!” emblazoned across the front of my chest as I came downstairs again, suddenly finding myself in a room full of very sharply dressed Tories while wearing a novelty shirt that was not even mine. I was handed a glass of very nice champagne (the Tories always do nice booze) and got to circulating. I soon met Ed Vaizey, who was at the time and remains still the Minister for Culture, Communications and Creative Industries. We bonded over very lovely hors d’oeuvres (the Tories always do nice hors d’oeuvres) about our mutual dislike of the recently disbanded UK Film Council.

Gove himself seemed rather brooding given it was a party that was fifty percent in his honour – until he stood up to give a speech. It was a corker of an address, funny, touching and dead on. Good politicians are usually able to give great orations when freed from the public gaze, amongst only friends. When they are out of the media’s glare and can say pretty much what they like. I know people say politicians like Farage and Boris do this as a matter of course, but they don’t; they’re just a lot better at pretending they aren’t watching what they’re saying than most. Also, neither of them are expected to run the country. Well, at least yet.

A few weeks following the Hilton-Gove birthday bash, I found myself at what could only be described as the Bizarro World version of the Hilton-Gove birthday party: a book launch at the house of Alan Rusbridger, the editor of the Guardian. I ended up at one point in a circle of people I had never previously met. One of them worked for Respublica, a right of centre think tank, who was giving a quasi-speech about how much liberalism sucked, using large automobiles as the basis for his argument. The bloke beside him was nodding along and so I figured perhaps he was from Respublica as well. Turned out I could not have been more wrong on this count, as soon became relevant. Somehow we all got onto the subject of Nicolae Ceausescu and I offhandedly described the former President of Romania as a dictator. This completely set off this chap I had mistaken for a right-winger.

“Ceausescu was a great man,” he said with tears forming in his eyes. It turned out I was speaking to an unreformed Stalinist, a real live one. You think certain attitudes to historical figures are set in stone, decided, settled. Until you come upon someone defending the indefensible. The Stalinist smacked his head menacingly and said with a particularly sociopathic gleam in his eye that I must be stupid to go around saying pejorative things about an autocrat who was beheaded by his own people on Christmas Day nearly two decades previous. I stood down, feeling like defending my stance on Ceausescu was not worth a champagne flute in the face. I then walked over to William Wallace, Lord Wallace of Saltaire, and asked him if perhaps I really was being harsh in describing Ceausescu as a dictator. I never like to fall back on lazy intellectual assumptions and am happy to have my attitudes challenged (if perhaps not by the threat of physical violence). William said to me:

“It’s funny you should enquire about Ceausescu’s autocratic tendencies; I asked the very same question of Franco when I met him in 1975.”

While I tried to look cool after having been told that the man I was speaking to had been involved in a face to face with Generalisimo while he was still breathing, William described how the Spanish dictator was never all that impressed with ol’ Nicolae. Right wing authoritarians never get on with their leftie counterparts. Shame really – they have so much in common with one another.