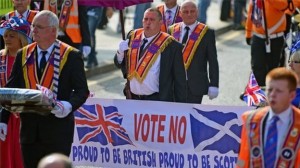 A group of Orangemen joined a Scotland No rally in Glasgow over the weekend. It was a reminder of a topic that has been little discussed during the Independence campaign: sectarianism in Scotland and what the implications of a Yes vote might be in starting a whole new chapter in this unfortunate side to Scotland’s history and cultural makeup.

The No campaign, of course, distanced themselves as quickly as possible from the march. The chief reason that sectarianism has mostly been swept under the carpet is because both the Yes and No campaigns do not wish to touch it with a bargepole. It is not talked about in Scotland at the best of times, and it is easy to see why. It flairs up either a lot or a little every time there’s an Old Firm derby, but a lot of people like to blame it on the hoards of people who cross the North Channel to attend the matches – when they know deep down that most of the sectarian feeling is home grown.

What would happen to the issue in an independent Scotland is hard to predict, but the signs are not good. In a fledgling state, looking to reshape its identity, it could get ugly on this front. Religious identity and nationalism share an uneasy and often hard to define bond that can be hard to contain, never mind control. Should things go not as smoothly as Salmond predicts on several fronts, most notably the economic ones, this could bring the situation to an unfortunate head.

Worse yet however, is what a Yes vote might do for Northern Ireland. Sinn Fein have already stated that they want a referendum should Scotland separate. It need not be stated what a can of worms this opens up. And with Scotland out of the Union, one can see people in England saying, “Let them have it. It would be nice to be rid of that problem.”

I recall visiting the Falls Road about ten years ago. At the time, the Troubles seemed like a part of history already, the murals a sort of cultural artefact in a Belfast that was attempting to re-invent itself. The fracturing of the Union could easily bring the worst of it all back again. Just thinking about it, even vaguely, upsets my stomach.

Of course, none of this may happen. The polls look set to deliver a very slight No vote. And even if Scotland did become independent, sectarianism might not rear its ugly head and the worst of what I’ve discussed above might not take place; it’s a unique situation and thus impossible to fully predict. But given the horrors of what might be, that is scant consolation right here and now, sat one day in front of the biggest decision that any group of peoples on this island are ever likely to take.