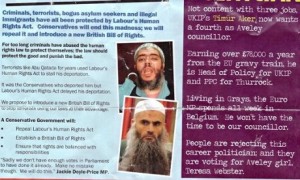 A local by-election is the stage for a punch up between UKIP and the Tories, with those in blue coming out, in this instance, as the bad guys. The Thurrock Conservative Party has produced a leaflet that reminds you that it isn’t just Farage’s bunch that can be nasty.

First off it refers to the UKIP candidate, Tim Aker, as Timur Aker, which was his birth name that he shortened as a schoolboy. Now for a party that always bleats about Gideon/George jibes from the Left (and fair enough too – what one wishes to call themselves should be respected), this is fairly low. Particularly as the leaflet had another element: on the half beside the one in which Mr Aker is referred to by his discarded first name, there lie pictures of two well known extremist Muslim clerics. There seems to be some attempt here to “Islamise” Mr Aker and thus tie him together with Abu Hamza in the minds of potential UKIP-Tory swing voters.

One could try and explain this away by saying that the Tories are merely exposing the internal contradictions within UKIP regarding groups outside Anglican white people with English genetic roots. When you read the leaflet, this could be trotted out as a half way credible excuse, I suppose. Still, the intention behind using the Turkish first name is pretty clear and pretty nasty.

Mr Aker’s first name issues aside, the leaflet demonstrates just how nasty the Conservative Party can be in terms of policy anyhow. The lead policy priorities of a Tory government, according to the Thurrock branch? Abolish the Human Rights Act, set up a new “British” set of rights, one that will apparently “ensure that rights are balanced with responsibilities”. So not really rights at all then, in the legal sense. Great stuff.

It is a handy reminder of the failure of Cameron and those around him to “modernise” the Conservative Party. When I look back on this era in a couple of decades time, the two things I will remember the Tories “banging on about” will be Europe and scrapping human rights. When Tory friends of mine, almost all of them liberals when it comes right down to it, ask me why I’m not a Tory myself given my belief in free market principles, I’ll need to say nothing in future; I can simply hand them the Thurrock by-election Timur Aker leaflet and be done with it. It explains absolutely everything.

I’m now imagining joining the Conservative Party and then being asked to deliver a leaflet saying that a Tory government would scrap the Human Rights Act. I’d have to quit the same day I joined.