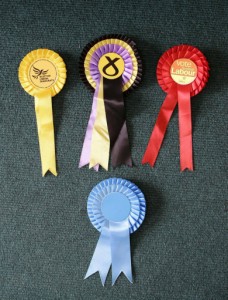 This was the response I received from a middle aged woman of medium height and medium build to the question I’d been asking all day: “Are you registered to vote?” I was blocking her path into the ASDA on Old Kent Road as she answered me, and I stopped acting as an impediment to her shopping as soon as she quipped her two-sentence reply.

This was all part of National Voter Registration Day, which for those of you who are interested, was yesterday. I had been assigned there through my day job to act as a registrar. There were sheets given to us that were to be filled with the details of those missing out on their right as subjects of the realm to vote. The evening before this outing, I had my worries about what lay ahead; I thought I would certainly be in the firing line of the odd anti-politics rant or would experience a few people telling me how and why Nigel Farage was the only person fit to run the country. But what I hadn’t anticipated was the depth of people’s ignorance in regards to how voting in this country works on even the most fundamental level.

“Vote for what?” was the most common answer to my recurring question. After realising people were not about to hang about listening to a longwinded response to their question, I adapted, developing a simple answer:

The most common path for the conversation to take from here was for the person I was canvassing to say:

“Of course I’m registered – I pay my taxes,” as if through the act of settling one’s taxes, one is automatically registered to vote. This is an extremely common misconception in Britain; that because the council has one’s details in order to tax you, they should then have the same details on hand when you want to go and do your duty come polling day. I suppose it makes a kind of intuitive sense. It is, however, completely incorrect. And with the introduction of Individual Electoral Registration, this problem could be about to get a whole lot worse.

Although the day was disheartening, I soldiered on. I approached a friendly looking chap loitering by the doorway. I asked him the question of the day.

“I am Albanian. Not allowed to vote.”

It wasn’t said, but the expression on his face mixed with his words seemed to imply that he was an illegal immigrant. That was the best excuse I came across for not wanting to register to vote all day.

The lasting impression I took away from my time in front of ASDA trying to convince people to sign a piece of paper for which they got in return a right people the world over fight and die for, was that we need to radically rethink the way people become registered. Armies of people like me in front of supermarkets the nation over will not do the trick, trust me (our target for the day was two hundred registrations. Between us all, a rotating staff of seven, we signed up four people).  I’ve come up with a few ideas; I will warn you that none of them are particularly original. They have, in fact, been bandied about for some time, which makes it all the sadder that all of them are still sitting on the shelf.

We need to register people not already on the register at places in people’s lives where they intersect with bureaucracy as a matter of course and are in a mindset to deal with it. Being asked to register at a GP’s surgery would be a great place to do this; most likely people are signing up with a new GP because they’ve moved, so the need to re-register at their new address is a live issue. At the Post Office; at the DVLA; and most importantly, when you graduate or are just about to graduate from secondary school. If everyone could be registered at school, the register would be almost one hundred percent complete.

The only other issue would be people moving, which of course they are most likely to do several times in their lives. This is where the Internet could come in handy; when you’re registered at school, you would get a voter ID number, just like your driver’s licence number. Then, a website on which people could login and simply change the relevant address would solve the last of the problems.

I know I’ve made this sound overly simple; I’m certain someone could give me a million reasons why all of this is too difficult to do. But as it stands there are millions of reasons it needs to be done as fast as possible, namely those citizens who are not on the register, perhaps don’t even know about it and because the whole thing is a major hassle, they can’t be bothered to worry about it.

Before sacking off from Old Kent Road ASDA, the very nice bloke who worked at the supermarket who was responsible for taking the completed registration slips from us for submission told my workmate Chris and I that it was great that we were helping to get rid of Boris Johnson. I was baffled as to what this meant but could only assume that he, like many others we encountered on the day, thought we must have been secret Labour party spies.

I hope when February 5th, 2015 comes round, we’re a lot further down the road to a complete register. But judging by the mood on Old Kent Road, I’d say we have a ways to go yet.