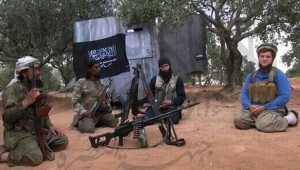 The first suicide bombing in Syria to definitely involve an American perpetrator has now taken place – at least if a video released by Al-Qaeda is to be believed. Moner Mohammad Abu Salha, from Florida, pledges to blow himself in said piece. It has been confirmed that Mr Abu Salha has died in Syria, but where and when specifically is harder to pin down. There are so many suicide bombings in Syria on a daily basis, it becomes a needle in a haystack exercise.

It is estimated that there are as many as ten thousand western fighters in Syria, the vast majority fighting alongside jihadists. The training and experience these young men will receive will be a nightmare for western governments for years to come, as and when they return to the US and western Europe, many with a high level of knowledge on how to subvert intelligence, an ability to acquire and use all manner of sophisticated weaponry, and the chip on their shoulder that took them to the Middle East in the first place as motivation. Worst thing is, it is very difficult to think of what the West could be doing to combat this better than it is at the moment. So long as Syria remains in a state of war, this will become a larger and larger problem. Particularly as the civil war there has already infected neighbouring states, most notably Iraq, a problem which looks to only get worse. But our thinking on it all could start by being a lot less muddled.

Just as the Middle East is scarily on the precipice of all-out war, the discussions around what is happening in the region within the West are taking on definite patterns, many of them quite frightening in and of themselves. The Left has hardened its pro-Palestinian, anti-Israel stance, one that is not motivated by anti-Semitism at present, in the main at least, but certainly is something to keep an eye on in this regard. It is felt that we have abandoned the Palestinians to their fate according to this train of thought. However, somehow letting whatever is going to happen in Syria just happen never enters into the equation. I recall when western intervention in Syria was being discussed last summer, someone, I won’t say who, saying, “Give peace a chance”. When thousands are dying every day, it is hard to call that peace. Wars are wars whether the West is involved or it isn’t.

On the Right, an isolationist strain has emerged, even in America. The idea that this is a war that has nothing to do with us, our interests, so we should keep well out of it, is rife. I find it odd that this same group of people who were so keen on marching into Iraq ten years ago on an incredibly flimsy pretense look at the Middle East today and say, “Nothing to see here”. That’s before we come to Israel, a shibboleth on the American Right. How they cannot see that war all around Israel, mixed with the current state of affairs in Gaza, is not toxic to the long term stability of Israel is beyond me.

To summarise, the West seems to be going through a period of sticking its head in the sand in relation to the Middle East, and at exactly the wrong possible time as well. If nothing else, think of the image of Mr Abu Salha, talking about his joy in going to heaven following his martyrdom. If we had no other reason to worry about the situation in the Arab world, the idea of this happening somewhere in the West itself should be enough to make governments rethink. Again, what those in power should be doing is hard to say, and taking action gets harder and harder every day as the situation becomes ever more complex. But we can start by have a more honest, less ideologically driven debate around it all.