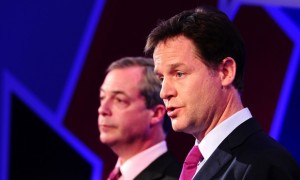 Not surprisingly, there was a divergence of opinion between the Westminster commentariat and the public at large as to who won the debate on Europe between Nick Clegg and Nigel Farage. The lobby thought, almost to a person, that Nick Clegg was the winner. Even amongst the right wing press, even amongst the Eurosceptics. Heck, even serial Nick Clegg hater Quentin Letts said that he thought it was unfortunate that Farage had become the unofficial spokesperson for Euroscepticism. Meanwhile, a snap poll conducted by YouGov concluded that Farage had won the debate over Clegg 57-36. On reflection, Farage winning the public vote was not a surprise. The disparity in approval rating between the two politicians is most definitely in Farage’s favour. But what I found interesting about the YouGov poll was the way the vote as to who won the debate split out according to party preference.

Those who identified themselves as UKIP or Lib Dem, not surprisingly, plumped for their respective men almost 100%. But this represents only a quarter of the people polled. So what did the other three-quarters think? Conservative voters thought that Farage won by a 3:1 margin. This is unsurprising if you’ve ever spent any time at Tory conference. The grassroots of the Conservative Party is incredibly Eurosceptic and also quite favourable to Nigel Farage. A lot of them wish he was their leader, something a large number of them mutter under hushed breath. So no surprise there. As for the Labour vote, it split out 51 Clegg, 42 Farage. This was decisive in Farage winning the poll – if the Labour vote had gone the same way as the Tory vote, 3:1 for Clegg, it would have been a draw.

There are two likely explanations for this. One, and most probable, Clegg is still so disliked by Labour voters that they would even prefer to help Farage rather than the leader of the Lib Dems. In the same way that Farage and his cohorts hate Europe so much that it trumps everything else, including national security, do Labourites hate Clegg so much that this loathing is put above all else – including the future of the country? If so, this isn’t great news for Miliband as he heads into an election in which a majority is looking increasingly beyond him.

The second likely explanation is that the Labour party really is split down the middle on Europe. This would be worse for Miliband than the first explanation, for it would reveal the extent to which Labour is increasingly vulnerable to UKIP. Also, how difficult it will be for the mostly Europhile shadow cabinet to continue being so.