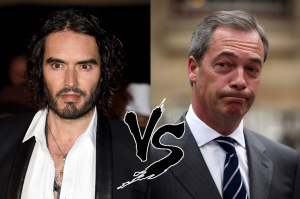 I didn’t watch the Farage-Brand Question Time when it aired last night. Truth is, I couldn’t really bear to. I watched the conveniently edited for YouTube highlights of both Nigel and Russell instead. It was all you really needed to see, wasn’t it? I for one didn’t need to sit through Penny Mordaunt and Mary Creagh being hassled while trying to speak over two of the biggest mouths in Britain, valiantly attempting to get the party messages across in the midst of the “Westminster is all crap” din.

What did I glean from the twenty-two odd minutes of Question Time clips I watched? There was one thing about Farage and UKIP that struck me for the first time as I watched Nigel’s lips flap. He always goes on about how rubbish the political class in this country is, and yet he spends his whole life campaigning to take power away from Brussels and put it back into the hands of the very people in parliament he rails against. Brexit is supposed to solve all problems according to UKIP and yet all it would mean in practice is the Westminster elite having even more authority than they have at present. Wow, UKIP actually makes even less sense to me now.

Brand took some goodies from his usual bag of simple minded tricks. I actually think, watching his performance last night, that the bloke does mean well, deep down. Because he must be doing this whole campaigning shtick (what exactly he’s campaigning for, no one, including Russell himself, has figured out) due to the fact that he really believes in what he’s saying and that he can make some sort of material difference. Think about it. He’s not angling for parliament, clearly. He was asked in a confrontative manner by an audience member last night why he wouldn’t stand for the Commons last night, and all Brand could think to say was, “I’m scared I’d become just like the rest of them”. I don’t think he’d really seriously considered becoming an MP before. I can hardly blame him for that – it is one of the worst jobs you can have in Britain, after all. He can’t be on this crusade for the attention; he’s already mega-famous.

But it does pain me to watch him rant on about the failure of this, that and the other to bring on the socialist utopia he seems to crave, not ever realising that human beings are complex creatures and that problems in society rarely have easy answers. He just seems to see these bankers sitting around trying to fuck over the poor, and that if their power was taken away from them then everything would be hunky dory. Just like Farage thinks Brexit would magically solve everything.

Then we come to Ed Miliband. I want to say right off the bat that it is not my intention to lay all of the problems of mainstream politics at the Labour leader’s feet. It just so happens that he decided to give his speech on the deficit on the same day as the Farage-Brand Question Time, making a comparison between those two comedians’ anti-Westminster narrative and Ed’s supposedly sensible solutions to things inevitable.

So how was Ed’s speech? It was much the same as every speech Miliband has given since his 2013 autumn conference address in that he probably would have been better off having not given it; having simply said nothing at all instead. Like all of those other speeches I just alluded to, it reeked of desperation, of wanting so badly to communicate Ed’s suitability for the job of Prime Minister and not really achieving this aim even slightly.

He trotted out the confused line Labour has on deficit reduction: yes, cuts are necessary because getting the budget deficit down to nothing before 2020 is key. Just so we have an idea of what we’re talking about in terms of numbers, the current shortfall, every single year, is around £100 billion. Ed also said there wouldn’t be tax rises to help close this gap, even ruling out a VAT increase. So it will all come from cuts.

He outlined some things he would slash, were he given the privilege. But they were all tiny, token things that would do little to actually cut the deficit. He says he wants to cut local government by £500 million. Or 0.5% of the cuts needed, in other words. Where is the other 99.5% coming from? Cutting winter fuel allowance for “wealthy pensioners”. Capping child benefit rises at 1%. Scrapping police and crime commissioners. I’m not against any of these ideas; it’s just that they would be mere stones in a very large ocean of deficit claw back. Where are the huge cuts going to come from in order to take £100 billion out of government spending? All Ed would say further is that they would be “sensible.”

I bring all of this up to explain why people turn to people like Russell Brand and Nigel Farage for answers. Because what people hear from those who hold the positions that should be providing the answers, like the leader of the opposition, are things that make little sense, whatever Ed would say to the contrary about the nature of his deficit reduction plan. The charlatans gain strength when those the public would normally turn to are even more incoherent.