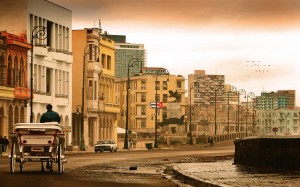 The trade embargo still has yet to be lifted, and hopefully it will be very shortly. The ability for Cuba to trade with America would not only help lift many Cubans out of poverty, but also greatly weaken the Castro regime and move the country towards a saner political and economic path.

I say all of this not because I am a fan of the way Cuba has been run for the last fifty-five years (which should have been evident in my last paragraph), but because the continuing isolation of Cuba by the US was both horribly hypocritical and dangerously counter-productive. This a country that has not only normal but friendly relations with Saudi Arabia, a country so repressive it makes Cuba looks like a libertarian’s paradise by comparison. There are many other countries the US has warm ties with that are not bastions of liberal democracy. The only way the Cuban embargo makes sense is through the lens of the Cold War, which has been over for about a quarter of a century. Capitalism won, communism lost. The continuing punishment of Cuba has seemed cruel for quite some time.

It has also probably been a net benefit to the Castros as well. They have been able to spin an anti-American line due to the embargo, one that says that Cuban poverty is down to American cruelty as opposed to the faults of their discredited economic system. The Americans harsh treatment of Cuba has given communism and the Castros cover.

Cuban exiles in Florida are predictably furious. Marco Rubio was right in there, describing the move by the US as “inexplicable”. They will point to things like Venezuela’s president, Nicolas Maduro, saying that this is a “moral victory for Castro”. They should know better than to listen to tinpot dictators like Maduro on anything, much less Cuban-US relations. They should also accept the following two things: the Cold War is long over and communism simply does not pose an existential threat to the United States of America, and secondly, as bad as the Castro regime has been on things like freedom of the press and human rights, it’s really been no worse than the Batista regime it displaced. When you come to terms with those two things, the Cuban embargo seems unbelievably arcane.