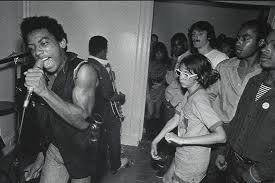 My two year old daughter is going through a Hot Rats phase. In other words, she wants to incessantly listen to Frank Zappa’s 1969 magnum opus. It’s my fault, obviously; I was the one who introduced it into her life. In the same way that I’ve introduced most things of a pop cultural nature to her – by presenting something I figure she’ll hate and being pleasantly surprised when she likes it (she is discerning, however. I’ve had a few “Daddy, this is terrible” comments along the way). Happy that is until I’ve had to sit through “Son of Mr Green Genes” for the sixth time that day. Then all of this musical education feels less like a good idea.

So there I was, being asked for “Peaches En Regalia” yet again, when I thought I’d try and introduce her to something quite different.

“Let’s listen to some Bad Brains, yeah?” I asked. She said that sounded good (“Bad Brains” would inevitably sound interesting to a two year old, I think). So I put on the best Bad Brains song in the world. And she loved it. We danced around listening to it several times in a row. It’s always a sign of good pop music when a small child can instantly love it (The Beatles, for instance, almost always pass this test), and I happen to think hardcore punk at its best was some of the best pop music ever devised.

The band first formed in Washington, in 1975 as a jazz fusion group calling themselves Mind Power. A few years later, they were turned onto punk by a friend and they never looked back. They were different from a lot of punk bands in three main respects: one, having been a fusion band to start with, they were much better musicians than pretty much any other punk group of the period; two, they were a cosmopolitan group of guys, and as a result their lyrics tended to be much more mature than some of their contemporaries’; three, they were black, an oddity in the often regrettably whitebread world of hardcore punk.

They were also a very good reggae group and their first, eponymous album contains two great, laid back jams in amongst the aggressive hardcore. For make no mistake, Bad Brains were the hardest and fastest of them all, at least in the early 80s before groups they influenced came along to up the ante. That best song my daughter and I danced around to was “Pay to Cum” incidentally, which is the greatest punk song ever – if you want to know whether this type of music is for you, the Bad Brains song may be the ultimate primer. It’s fast and aggressive yet somehow beautiful at the same time. The lyrics are great too, even though the tempo of the number makes them pretty much redundant. It’s sort of like a punk “A Change is Gonna Come” for the early 80s, if that’s not too strong a statement (it is too strong a statement, but I’m making it anyhow).

Bad Brains are even still going, albeit with the usual comings and goings of band members. Because they were all such good players in the first place, I can imagine they still have something to offer too. A lot of punk bands would inevitably be less fun once the sheen of youth fell away, but I can belief that Bad Brains still do a decent “Pay to Cum”. But whatever they produce now is a bonus. I’m just glad they ever existed in the first place, particularly given how unlikely they seem in retrospect. Perhaps if there had never been a Bad Brains, we would have had to invent them.