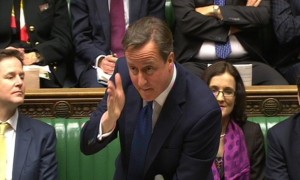 Cameron responded that he had spent more in this parliament on flood defence than Labour had in the previous parliament; Miliband then countered that if you took into account inflation, this was false; basically, the Prime Minister was ahead at this stage as Miliband’s arguments were too circular to stick and besides, trying to make it sound like the Tories don’t care about rural communities was never going to fly.

It went south for Cameron once Miliband started to ask about the number of climate change deniers he had on his front benches. He repeated damning quotes on the subject from Owen Patterson and Michael Fallon. Miliband could have spent another twenty minutes dredging up worse lines from Tory backbenchers on the topic had the leader of the opposition had the time and inclination. All poor Cameron could do was waver and equivocate. It’s like this for him on Europe, climate change, social issues such as equal marriage; he’s not in the same place as a huge number of people in his party and he knows it. He can try and talk about how green his government is, but the “green crap” dig lives long in the memory.

Miliband wanted to come out of this session having reminded everyone that that the “Vote Blue, Get Green” line from 2010 was complete rubbish. Job done.