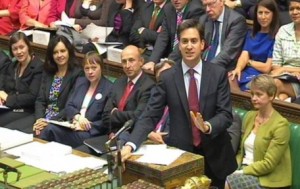 Verdict: Miliband wins, but Cameron gets in some good punches at the end.

Miliband won because he had an open goal and for once decided to fire the ball into it. No matter how the government tries to spin the fact that Royal Mail share prices have gone up considerably since the sell off – it could be seen as a good thing as the business has taken off as a business, many of the people who profited from the share price rise are Royal Mail employees themselves – it was all going to sound bad to the Great British Public. Particularly this whole business about the sixteen people in the City stitching everything up, promising to hold the shares and then dumping them. Again, I’m sure there were solid reasons why the government did it this way – but it just sounds dodgy to the average person paying it scant attention.

MIliband did all six on Royal Mail selloff today, unsurprisingly. Cameron could do little but fight back as best he could. But the Prime Minister did improve a lot as things went on. The “you would have done it yourselves, but the unions wouldn’t let you” line sounded desperate when he first said it, but it helped Cameron wedge himself back into the debate. During the answer to the final question, Cameron asserted that the last Labour manifesto called for privatisation of Royal Mail itself, which is incorrect. However, the policy was dropped from the Manifesto at the last moment, so Miliband and Balls confused faces were pantomime. It was on the cards during the New Labour years but Brown decided to dump it very close to the election. So while factually inaccurate, Cameron’s assertion does help to remind everyone of the somewhat less than socialist intentions of the previous Labour government, thereby demonstrating the hypocrisy of some of the claims from the shadow benches.