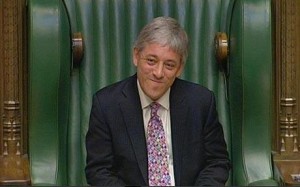 Miliband had one of those weeks in which he asked what amounted to the same question six times. And it was territory he’d already covered – the Royal Mail sell-off. Now, whatever you think about the sell-off, whether there were dodgy elements involved in the “sweet sixteen” or not, surely even the most ardent supporter of the Leader of the Opposition has to grant that using two whole PMQS on the topic is a bit overkill? It makes it seems like he’s avoiding speaking about something. Namely the economy.

The theme of Miliband’s bent today could be summarised like so: “One rule for the hedge fund managers, one rule for the postal workers”. As these things go, it’s not too bad a line. But Miliband needs to flesh this out a little more and, bringing this all back home, he needs to confront the Prime Minister on the economy, not be seen to be backing away from such a conversation. Miliband needed to come out today, given what had happened during the recess, and offer his own counter-narrative on the economy. The only time he got close to doing this was in the sixth and final question, when he trotted out the old “cost of living crisis” stuff. Even Ed sounded bored of the topic as he said it. Labour are running out of time to come up with their own take on the economy that will resonate will people beyond their core; it needs to be understandable in particular to people in the south of England, which happens to be where most of the seats Labour need to win to get a majority are situated.

So yes, Miliband had some good lines, but the focus and the killer argument were both notable by their absence. Cameron got to close his encounter with Miliband on a high note, talking about how Miliband was avoiding talking about the economy. It resonated because it was true.

On a final note: what’s with Bercow these days? I, I’ll admit it here, am a bit of a fan of the speaker. I like his no nonsense approach. However, I think he overstepped the mark today when he interrupted the Prime Minister of the country, and then when Cameron complained about this, Bercow said: “He can take it from me – he’s done”. The mention of Fiona McTaggart’s school was really a bit unnecessary as well. It actually smacked of partisanship, which is exactly what the speaker is never supposed to engage in.