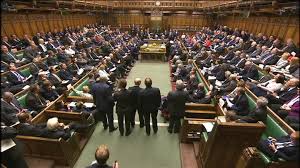 Verdict: a game of two halves, resulting in a draw.

After several lame duck sessions, in which the Leader of the Opposition tamely let Cameron look like a world leader, Miliband came back fighting this time round. It was nice to see some spark in the House again after such an absence. Certainly the fact that Miliband has been so heavily criticised over his response to the budget meant he needed to have a strong showing today, but nonetheless it was nice to watch unfold.

Ed split his questions roughly into two parts, the first dealing with energy price freezes, the second on cost of living. Miliband was much better in the first half and if there had only been three questions asked today I think the Labour leader would have won by a long stretch. Not because what he had to say was particularly brilliant, but he delivered it with gusto and Cameron’s responses were somewhat lame. The essence of all three questions was this: in light of the SSE choosing to freeze prices until 2016, would the Prime Minister like to rethink what he said about price freezes being a “communist plot”? Now, this question has a simple answer, from a Conservative point of view. The fact that SSE has chosen, voluntarily, to freeze its prices shows that the free market works. If companies can see the value in freezing prices to attract customers, why would any British government need to impose prices freezes on them? Instead though, Cameron started listing a bunch of numbers that made it seem like he’d been throw a googly and was trying to evade the question. Round One, as I said, definitively Ed’s.

Then Miliband decided to use his last three questions trying to flog the not only dead but dried bones horse that is “cost of living”. What is it that makes Ed’s people not get that this line of attack isn’t working? It just sounds lame every time. It’s like Labour know the debate on the economy has not fallen for them and so they are trying to basically say, “Yes, but the wrong people are getting on, not the right ones.” Given the lameness of the attack, Cameron was able to go to town, get fired up and start talking about what he should have mentioned in the first half of the debate, namely that the government is talking about price cuts for energy bills instead of freezes (this is itself a bit of a fudge, but a good line nonetheless).

Balls mouthed “calm down” to Cameron as the Prime Minister did his Lear in the storm impression. But this isn’t going to stick because people don’t think the problem with Cameron is that he’s a hothead – it is the precise opposite, as it happens. People think Cameron is a cold, detached robot who doesn’t really care about anything. So helping him build up a reputation as a firebrand isn’t really helpful to Labour, I would surmise.

So, a very good PMQS, a return to form. Both sides will probably feel like they got what they wanted out of it.