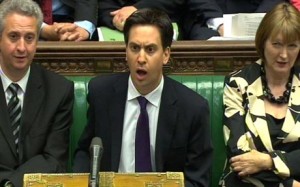 Verdict: Miliband wins, but only because Cameron was memorably awful

Ed split his questions allotment in two today: the first half was about rent controls and the second half was about the Pfizer-AstraZeneca takeover. The top section was all about Miliband’s rent control proposals. This was the leader of the opposition providing the Prime Minister with an open goal, one that Cameron managed to deposit in the upper balcony, row ZZ. As was usual for an Ed Miliband PMQS, it was the same question three times: will Cameron disassociate himself from his party chairman’s comments that the “Generation Rent” proposals are “Venezuelan”? Cameron should have buried Miliband on this, given that rent controls are quite possibly the worst idea Labour have come up with this parliament (and that is really saying something). Everywhere these sorts of controls have been tried in the world, the same thing happens: everyone in tenancy when the rules comes in are sorted, and everyone who subsequently has to try and find a place to live, who has to rent in the private market because they aren’t poor enough for council housing and not rich enough to buy, gets completely stuffed. No one moves because it would leave them either homeless or having to do what everyone else who is looking for a place would now have to do, which is hope to get something on the undoubtedly exorbitant black market.

But Cameron made nothing like these points. Instead he admitted up front that he hadn’t really read Labour’s proposals and then waffled vaguely about building more houses before dipping into the place he goes whenever desperate, the whole “Unite decides Labour policy” routine, which works only when it doesn’t look like Cameron is using it as a diversionary tactic. For Dave to get cornered on Labour’s most ropey policy is rather shameful. I’m almost tempted to give the Prime Minister a pass, assuming he’s temporarily unwell.

The second half of Ed’s questions focused on Vince Cable (without the Biz Secretary ever being mentioned by name) and his call for an enquiry into the proposed takeover of Astrazeneca. Granted, this was a tougher line of questions than the first lot, as Vince had slightly put the PM into a pickle, but still Cameron could have done much better with it. He started on about British jobs for British workers, blah, blah, UKIPishness, then doing a complete U-turn and becoming all neo-liberal on us, saying that it’s a free market and if a business wants to buy another business that’s the way it is. You can’t do staunch nationalist and internationalist idealist in the same sentence, Dave, it doesn’t work.

Anyhow, the Rt Hon Cameron has seven days to get over his manflu and do better next time.