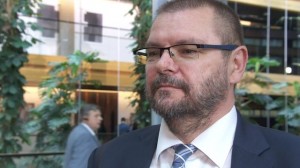 UKIP was very recently on the verge of having its grouping in the European Parliament, the Europe of Freedom and Direct Democracy, essentially disbanded. The members of the group would have lost out on what amounts to around a million quid in funding as well as having allotted parliamentary time to make speeches on the floor of the parliament removed. This crisis was triggered by Latvian MEP Iveta Grigule departing from the grouping (rumour has it, because of Farage’s pro-Putin remarks earlier this year), leaving it one MEP shy of the minimum requirement.

But in steps Polish MEP Robert Iwaszkiewicz to save the day. Mr Iwaszkiewicz belongs to a party called the Polish Congress of the New Right, led by a charming fellow named Janusz Korwin-Mikke. Mr Korwin-Mikke and his merry band have several strings to their bow, only the real highlights of which I have time to touch on here: Korwin-Mikke has called for all women to be disenfranchised; has said that Adolf Hitler was not directly involved in the Holocaust; possibly best of all, Marine Le Pen ruled out forming an alliance with the Polish Congress of the New Right on the basis that their political views are too extreme.

Of course, the excuse that Farage has dealt to the British press is that while Korwin-Mikke has said horrible things, Mr Iwaszkiewicz is the only member of the far right Polish party to be joining the EFDD and he’s perfectly clean. Well, other than making jokes about beating up women, of course.

The press, particularly left wing sections of it, have jumped into the fray, calling UKIP a bunch of racists for partnering up with such questionable people. Chuka Umunna has commented, calling the move “not in keeping with our British values of respect, tolerance and fair play”. But as per usual, the chance to hit UKIP where it really hurts is being missed.

The problem with a member of a far right Polish party joining UKIP’s grouping isn’t so much that it displays their racist/facist tendencies as some have argued and will continue to argue, but that as it shows what a bunch of hypocrites they are. UKIP and Farage in particular talk endlessly about how all of the other parties do backroom deals that have no moral principle behind them, just to hang onto money and power. I could jump in here with a point about how UKIP are doing just that with this latest manoeuvre, but UKIP’s deputy leader, Paul Nuttall, has already put it so eloquently himself when asked to explain the whole thing from a UKIP perspective:

“That’s the nature of European politics. It’s not like the UK. Unfortunately, it’s realpolitik out here.”

So basically, they did what they had to do to get the job done. They saddled up with someone from a party even Marine Le Pen wouldn’t touch to save their EU grouping a million pounds. Whatever, but after that move I don’t want to hear Farage talk about how pure and honest UKIP is, how they don’t make the same “smoke filled” backroom deals that other parties have to (and with Farage involved, the room would almost certainly have been literally smoke filled).

I know what UKIPers will say in retort. Nuttall was only talking about European politics. Note the line about how things are different in the UK. In other words, UKIP have to pull off horrible deals with unsavoury people in Europe because, you know, it’s all foreign over there, but they’d never think of pulling anything like that here in good ol’ Albion. Yeah, sure.