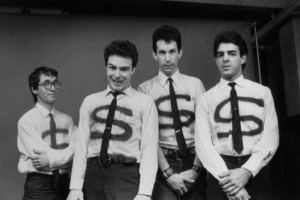 When discussing one’s political influences, as a general rule people like to upmarket their antecedents. The more heavy weight, obscure and abstruse the person or group who supposedly shaped your politics, the better it reflects upon you. Supposedly. Unless of course you’re going for an Arnie Graf, grassroots-y type of vibe. Then it has to be someone even more obscure, like your next door neighbour.

But I have to admit here and now that one of the biggest influences on my own politics was the seminal San Francisco punk band who called themselves the Dead Kennedys. And more to the point, the Dead Kennedys lead singer, who called himself Jello Biafra. So certainly not academic or recondite – obscure, I suppose, if you don’t know much about American punk. I discovered them when I was fifteen. I was searching around for something other than the thrash metal bands I’d already become bored with, so I went to the local underground record shop and picked up a copy of the DK’s “In God We Trust” EP. I flipped it round to discover a picture of a dystopian American future, filled with Klu Klux Klansman and evil old ladies. Below it was a lyric sheet. The first song was entitled “Religious Vomit” and contained a verse which read: “All religions make me want to throw up. All religions make me sick. All religions make me want to throw up. All religions make me wanna go BLAH!” I think it was the BLAH in caps followed by the exclamation mark that tipped me over into buying it. For a kid who was angry and atheist, it seemed, ironically enough, like a gift from heaven.

Soon I was listening to little else but Jello Biafra’s high pitched voice, infecting me with his particular brand of left-liberalism. At the time, I thought of the Dead Kennedys as far-left agitators, and it’s amazing how many people remember them as such. However, recently listening again to “Give Me Convenience Or Give Me Death”, their post break-up album of singles and B-sides, revealed to me for a start how much the band really did influence me, and also how decades of living in Britain and spending time in several continental countries has changed my viewpoint on what exact is meant by the phrase “left wing”. There is no mention anywhere within the Dead Kennedys oeuvre about the wonders of trade unionism, for example, or the need to enlarge the state at all costs. In conclusion, whereas I used to wonder just how far I had moved away from the lefty influences of my youth as I have gotten older, my trawl through the band of my youth’s songs confirmed that I always was a liberal, at least in the European sense of the word.

One track on “Bedtime for Democracy”, their last album, is a good example of the liberal, not overtly left, tendency of the Dead Kennedys’ work. It’s called “Triumph of the Swill” and is about the decline of the record industry. But during the chorus, the refrain is “government music”, something the band is railing against the idea of. The sense that popular music was so bad in 1980’s America by some sort of big state design was bizarrely common place at the time. While this reminds one of American paranoiac tendencies, it also recalls for me what I didn’t like about Ronald Reagan, and how that shaped my liberalism to large extent as well. Bonzo’s mate was the main antagonist throughout the Dead Kennedys’ collected works and the band causes you to reflect often on the fact that he wasn’t small state – he was massive beyond all recognition state. In terms of overall budget deficit, the only government to rival Reagan’s in the history of the universe was George W Bush’s.

What I really remember about Reagan and the 1980’s was how much his government, apart from a rather loose take on fiscal matters, wasn’t about butting out of people’s lives so much as actively controlling them. There were constant attempts to try and ban almost everything, with only the American constitution thwarting the executive branch’s desires. Music and films were constantly fair game; American television was constantly filled with Reagan cronies telling the nation what to do and not to do; fundamental Christianity was rammed down everyone’s throats with the subtlety of a Bernard Manning comedy routine from the mid-70’s. This is why when I think of the term “right wing”, I don’t think of small state libertarians. The word conjures up instead the exact opposite: moral crusaders who wish to maintain the status quo at all costs and are happy to use the mechanisms of the state to do so. How accurately this reflects the real world has been tested on many an occasion, particularly these days when young Tory activists are often very liberal, while some left activists can be very authoritarian. However, these early impressions leave a large mark.

On March 25, 1980, the Dead Kennedys were invited to play their then underground hit, “California Uber Alles”, which was a song about what would happen if Jerry Brown became President (a sort of fascistic far left horror show), at the Bay Area Music Awards ceremony. Instead, they decided to play a song called “Pull My Strings”, specially written for the occasion and never performed by the band ever again. The band all wore shirts with a spray painted “S” on the front, their ties then making the insignias into dollar signs. The chorus ran: “Is my cock big enough? Is my brain small enough? For you to make me a star?” At first listen, it appears to be the DK’s most overtly anti-capitalist tune; upon further reflection, it’s actually pro-little guy, anti-corporatist.

In another song called “The Stars and Stripes of Corruption”, Jello does what very, very few punk spokesmen ever did – he outlines what he believes would make for a better society, instead of simply railing against the one he was ensconced in. So what are Jello’s main policy ideas? Legalise drugs, focus education away from sports and more into art and theatre, tax religion. No mention of socialism or even anything vaguely socially democratic whatsoever. It’s nice when the heroes from your youth turn out to be more sensible than you remember them to be.

Of course, in America the Dead Kennedys really were at the time and remain considered far-left loons, for the simple reason that it’s actually very, very, very hard to be bracketed as properly right wing in America. You essentially have to believe the rapture is coming within the next calendar year, find that any limitations put on owning your own nuclear devices for home protection is equivalent to the advent of National Socialism, and you must demand that the death sentence apply to all child offenders, including those under the age of one (but not the foetus. Nothing must happen to the foetus). If you waver on any of these things, vote Democrat.

But from a European perspective, I am taking the Dead Kennedys away from the socialists and reclaiming them for liberalism. As someone once said, there’s always room for Jello. I urge all of you who haven’t done so – and even more of a push to those that have but not for quite some time – to listen to “Fresh Fruit for Rotting Vegetables” in order to get a lift in your day.