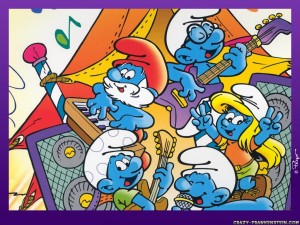 When I was twelve years old, I had a band called RDF. Don’t ask me what the acronym stood for; this was the cause of many fights between band members. Who were: myself on guitar, my brother on vocals and percussion, and a kid who lived down the road named Aram who played sax. There were utility members to RDF as well, including Muffin, the family dog. She could scream like a weird little midget as opposed to bark, so she fit right in with our rocking, pre-teen combo.

The style was sort of thrash metal meets free jazz. I would play power chords out of a little battery-controlled amplifier that naturally distorted everything, particularly as its battery power ran down, while Aram did an Albert Ayler impression and my brother whacked whatever object was close at hand. Sometimes, my sibling would sing. The lyrics he came up with were usually bizarrely political; I recall one called “The Big Tree”, which was an allegory about Reagan (the bit about the ‘Little Bush” may have been overly simplistic, if one wished to provide critical rigour to such things). There was another one about likening nuclear holocaust to a woman’s body, the memorable “Lovely Evening (For An Atom Bomb)”.

We would play impromptu concerts for the children of the area, who mostly cried through every performance but were too scared to leave. Although Muffin screaming into a cheap Radio Shack microphone usually was the last straw for most of the tiny crowd. When not warping the minds of the next generation of western Canadian youngsters, we recorded, prodigiously. Tapes and tapes and tapes of me playing terrible metal chords, Aram wailing tunelessly before breaking into “Mary Had a Little Lamb” on his tenor, while my brother shouted about the Iran-Contra hearings. Someone who could bear to listen to the extant hours and dig out the gems would have quite the artefact on their hands, sociological gold, no less.

The band also acted as a sort of meta-art project as well, apart from the recordings and the “concerts”. We would record “live” albums, the prep for which was crudely looping the fan sounds from various live albums into one continuous wall of fandom, then playing the tape of this while RDF would perform for our “audience” – and taping that. Or we imagined that RDF had its own TV show and come up with Monkees-like shenanigans for us to get up to. Just three wacky kids and their lunatic poodle terrier who wails like a banshee! We were certain that pop stardom beckoned as soon as we all sprouted pubes.

Alas, it was not to be. There was a falling out somewhere a long the way. I know there was; we obviously taped most of the falling out as it occurred and made an “album” out of it all. We were all set to record our masterpiece, a collection of Spinal Tap covers overlaid with dog screaming and atonal sax solos, when the whole project imploded. RDF could have been the next Ween had we been able to keep it all together. Oh well. We’ll always have “Pentagon Blues” and “Mega Vibro” to fish out from underneath hundreds of hours of the-Shaggs-meet-Ornette-Coleman-in-hell style cacophony.