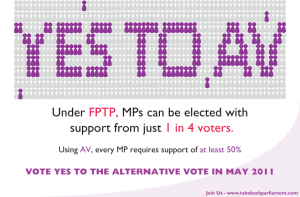 The Yes campaign is memorable, to those who wish to indulge in this sort of thing, as an awful one in terms of messaging. For instance, “Make Your MP Work Harder” not only didn’t really resonate with your average Mondeo Man, it had the dual disadvantage of really irritating a good lot of MPs themselves, Members of Parliament who often then went on to use the full force of their ground campaigns during the local election to crush us into the dirt.

In terms of bad messaging, there was a rock bottom at least. A point where it could get no worse, no matter how hard anyone connected to the campaign tried. The slogan “Make it Fifty” I would judge to be the nadir. Thankfully, it was used somewhat sparingly. Even still, people outside of the campaign (as well as some of us inside of it) asked the very logical question as to what the hell it was supposed to mean exactly.

“It’s about the fact that under AV, MPs would be required to get fifty percent of the vote,” I said through clenched teeth at the latest in a never-ending stream of campaign events, launches and debates. Mostly my molars rubbed against each other because my statement wasn’t even factually correct. Under AV, a winning MP would be more likely to have to get fifty percent of the vote than under First Past the Post, but it is by no means certain or built into the voting system. So our one attempt to construct a slogan that attempted to explain the benefits of the system was not even true.

We had an event to launch “Make it Fifty”, obviously. Part of this mania for having an endless stream of events flowed from the desire in the hearts of many of the senior staff to be seen on stage with the various celebrities involved with the campaign, all with the mindless assumption that in doing so they themselves might be conferred minor celebrity. We managed to pack the place out for the ode to making it fifty, at least, which couldn’t be said of all of these ceremonies. I was charged for the day with keeping some Daily Mail hack (can’t now recall which) away from someone lacking in brains and couth on the campaign who might therefore have said something newsworthy (again, I can’t recall who exactly – there were so many possible candidates fitting this description) while trying to help meet and greet those masses of people who turned out for the next chapter in Yes to Fairer Votes. The highlight of the day was, without question, Kriss Akabusi’s contribution.

“People on the No side of this argument say that AV is going to let the BNP into parliament.”

Cue the usual clapping at any pejorative mention of the BNP. Those applauding weren’t ready for what Kriss followed this up with, however.

“But you know what? If the BNP did get seats under AV, I’d be proud.”

The sound that followed was like nothing I’d ever previously heard. It was the noise that is made when a hundred and fifty people all sharply draw in breath simultaneously. A wonderful sound, it was almost worth being involved in the campaign just to have heard it that one time. Kriss seemed to take no notice of the horror filled faces which followed his comment and simply ploughed forward, the words “Make it Fifty” emblazoned in red over his shiny dome.

“Because that’s democracy. If the BNP can win under a fairer voting system, then fair play to them.”

This was distinctly off message from the Olympic bronze medallist to say the very least. We all thought afterwards that the news would be filled with “AV campaign says BNP parliament makes them ‘Proud’” type commentary, but it wasn’t even picked up anywhere. There were bigger, safer targets to hit, I suppose. Such as the fact that one of our paid campaigners had tweeted some anti-Islamic comments later that day. Or the fact that a fantasy budget dreamed up by the ERS in July 2010, saying that we had available and were going to spend six hundred million billion quid on the campaign, had been leaked to the Daily Telegraph. Or just the fact that in the short space leading up to polling day after the “Make it Fifty” celebration, the Arab Spring had arrived in Syria, there was an earthquake in Japan and the lead up to a Royal Wedding had begun. Oh yes, and a minor incident you might recall, the finding and assassination of Osama Bin Laden in Pakistan.

That is one of the big questions when it comes to the AV referendum. Is there any way that a Yes vote could have won given the circumstances, i.e. the bad Lib-Lab relations, how hard to Tories fought against it, the news cycle that just did not do us any favours? Having thought about it long and hard, I believe the answer is no, there was no way it could have been won. Referendums are not a great place to start a debate on anything and the public was simply not prepared to vote on a voting system they knew as good as nothing about. But a better run Yes campaign might have made the result closer, certainly. When you look at the No campaign and how shambolic that was until late in the game, when the intervention of Tory HQ saved the day to some degree for them, you realise that had we been better the polls could have swung a little bit in our favour.

Why does this matter if we still would have lost? Because if AV had been defeated say, 55-45 instead of 68-32, one could make the argument that there was some appetite for electoral reform, it’s just that no one liked AV particularly. The idea of changing the voting system for Westminster anytime soon would still have been extremely difficult, but you could have imagined another think about it in a decade’s time. The thumping nature of the defeat means that changing the voting system at Westminster is off the table even as a talking point for another generation, perhaps even longer. The real shame of that is hung parliaments look like they are about to get more and more likely. People will look for a solution, some way of breaking the deadlock but there will be no way of doing so that doesn’t involve changing something deemed to have been said no to in the AV referendum. Making the boundaries fairer would help, but not nearly as much as the Tories think or hope.

So what happens next then? I guess we’ll all have to wait and see.