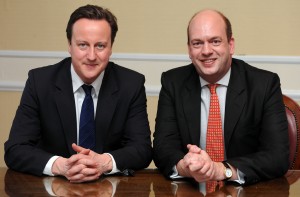 I’m on my way to Birmingham for Conservative Party conference at present. Looking forward to finding out what the mood is when I get there, but I wouldn’t be surprised if it’s not a million miles away from what I found in Manchester last week: slight feeling of doom, that things haven’t panned out as expected, and now who knows where everyone will be this time next year. Because strangely it appears that neither of the two major parties in British politics thinks they are going to win the next general election. Yet that means hung parliament, with the supposed beneficiaries being the Lib Dems – yet there are fears of mass electoral annihilation there (and very well could be if the polls stay at 7% for the party). The major beneficiaries of the age, the SNP and UKIP, are hampered by the electoral system in such a way that neither can really score anything over and above a moral victory.

So where does that leave the political landscape? Slightly inexplicably, it seems like Labour’s response to UKIP has been to stand still and try and blend in. Not upset anyone who might be inclined towards UKIP issues from their traditional, core vote and then hope the political map shapes out in their favour come May 7th of next year. The Tories plan, it seems but I’ll know more after getting a feel on the ground in Brum, is to continue to try and out-UKIP UKIP, a tactic that has failed utterly thus far but that they are still trying to have a run at.

I thought that when Carswell defected and the by-election was called in Clacton the Tories would fight it with everything they had. That they would realise the existential crisis they faced if UKIP got a seat. But it looks like they have decided to lie down in Clacton. The polls haven’t improved for them there and so perhaps they think that being seen to fight and losing is worse than simply conceding. They are wrong about that, but that’s their issue. What is a problem for everyone now, at least those whose politics are the antithesis of UKIP’s, is that the party looks almost certain to have at least two MPs in place before the general election. And with that, threaten to dominate the narrative of said election in a way that could be very ugly indeed.

One has to wonder now how many other Tory backbenchers are sat waiting to defect. Perhaps they just want to make sure Clacton works out in Carswell’s favour for sure – then we might see an avalanche. Many who are not Tories are wetting their lips at the prospect of UKIP’s fortunes, gleeful of the turmoil this places the Conservative Party in. I, however, am not so cheerful at the idea of UKIP having two MPs (this is actually a magic number – at that point, the party would qualify for short funding. Yikes.)

I’ll close with this: British politics seems to be entering a strangely illiberal time. Which is why a defence of liberalism from those of us who believe in it is more vital than ever.