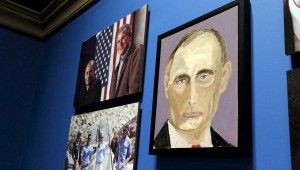 I write about Russia, and by extension, Vladimir Putin, a reasonable amount. As a result, through various social media outlets, I am exposed to a wide range of views on the Russian president. I get some pro-Putin stuff from people inside of Russia, which doesn’t interest me all that much. Most of it is really crazy anyhow, like the idea floated to me the other day by a Russian chap around how Putin had been on board MH17 and that’s why the Ukrainians shot it down. How Vlad managed to get off the flight, assumedly parachuting to safety at the appropriate time, bare-chested I’m sure, wasn’t really explained.

It’s the western Putinistas that interest me, and I’m specifically referring in this instance to people born and bred in the West, people with no connection whatsoever to Russia and/or the former Soviet Union, who either love Putin or at least feel the need to defend him at every turn. Their core belief seems to be that the western media are involved in a conspiracy against him, and that every news story from the region reported in the West has a built-in anti-Putin bias.

I think I’ve begun to understand what informs this group’s ideology. It is partly lazy Yankophobia; the notion that because they loathe American foreign policy, and Putin is indentified as an aggressor by the US, that therefore Putin is automatically a good guy. Now I’m as ardent a critic of American foreign policy as you’re likely to find, but the thought pattern that goes “my enemy’s enemy is my friend” is truly sad in its stupidity. It was also, ironically enough, the stated ethos of the Putinistas most hated figure, George W Bush.

The same style of thinking had Chavez lionised amongst sections of western people who should have known a lot better. Just because someone doesn’t like America, and manages to get one up on them from time to time, does not mean that their motives aren’t as questionable, or dare I say it, a whole lot worse than, what US foreign policy is attempting to achieve.

Me personally, what I dislike about American foreign policy is the ineptitude of it more than anything else. They tend to engage when they should stay out of things, and then ignore situations where they could do a lot of good if they were in the right place. See Iraq in 2003 for an example of the former, and Syria 2013 for the latter. This idea of the Pentagon as a group of evildoers sat round tables, plotting the downfall of nations, has never rung true for me. Most of the State Department’s poor moves rebound on America in a bad way eventually.

In closing, the Putinista brigade scare me as much as they do simply because they represent the rise of some very lazy thinking on a part of the population, the reasonably politically engaged, who should be thinking deeper thoughts about these sorts of things – not just looking for some sort of icon of anti-US feeling. Particularly when being viciously xenophobic and homophobic, ruling via a lack of a proper mandate and operating a corrupt kleptocracy doesn’t seem to be enough to convince these people that perhaps Vlad is a bad apple after all.