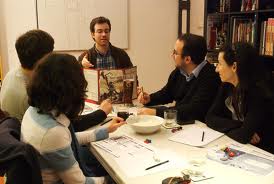 I went into Yes to AV HQ on the Monday following polling day, which was May 9th. As I approached my desk I found that someone was asleep underneath it. I noticed then that the office was littered with empty lager cans. The culprit was Sam, one of the interns. I shook him back to the conscious world and asked him why he was still in the office. He grumbled something about the conciliation party having gone on all weekend and then stumbled towards the lift.

A few hours after my discovery of Sam,  a few of my closer colleagues wandered in. I told them about the sleeping intern incident and we all had a laugh. A couple of them had been at the epic, apocalyptic party which had brought the Yes campaign to its forlorn conclusion and said that they weren’t surprised it was still claiming victims on the following Monday. Apparently it had been pure carnage, as if it really was the end of the world after we had lost so epically. One of the gang that had newly arrived asked everyone if we all wanted to go down the road for a drink. None of the group had to be asked a second time.

As I took my first sip of lager that day, something inside told me this would be the last time I would see a few of the faces around the table, a premonition that proved correct. As the only non-Labour person there, I got some gentle ribbing and some not so gentle ribbing. I had plenty of Labour baiting ammunition to throw back but felt the time was right to be amicable. By the time we left I had drunk five pints in about two hours. I barely felt tipsy. In fact, I went back to the office and did some more work. It struck me then that perhaps I had been drinking too much near the end of the campaign and should give my liver a well-deserved rest, something I proceeded to do.

As it happens, I continued to work on the campaign for a further four months, which was the time it took to clean up the debacle that was Yes to Fairer Votes. I did this as the sole remaining employee of the campaign, the last man standing. It was hell, one of the worst projects I’ve ever undertaken. To start with, a slew of folks emerged from the woodwork claiming that they had been promised money that I had never heard anything about. Equally foreseeable, a load of expenses claims that looked highly bogus, from names I’d never previously seen, started to land on my desk. One of them had a single line that read “PETROL – 900 POUNDS” with no accompanying receipts. I rejected ones like that out of hand. This led a person I had worked with on the campaign to tweet the following:

“Heard that several volunteers from the Yes campaign have not received their expenses back. This is a complete disgrace.”

I would have let the tweet slide. But then the tweeter emailed me saying:

There was a link to the original tweet below this passive aggressive remark. So I decided to respond by returning his email with the following:

Just wanted to let you know that while I am in the midst of cleaning up the shit left behind by pricks such as yourself (often literally), I was ever so glad to get your email calling my attention towards your abusive tweet. It’s wonderful being told how to clean up the remnants of the campaign from cowardly morons who were allowed to scarper on May 5th.”

It goes without saying that when you are replying to emails with the a profane salutation, you are probably slightly tense. For what it’s worth, I got a one word response from the man I’d addressed in such a rude fashion:

Ever since then, he has only ever spoken to me when absolutely, socially necessary.

Other choice moments from this period: I was chasing the deposit on our office in Bristol when the landlord informed me that several buckets of purple paint appeared to have been intentionally ground into the carpets. We had printed 10,000 leaflets on polling day that no one bothered to tell me about, leaving a bill for £2k that we no longer had. It was never fully absorbed by anyone in the campaign that I was the only person keeping an eye on the money we had in the bank; that if you didn’t inform me of an invoice coming in the post, I didn’t then budget for it.

It soon became apparent that we didn’t have enough in the coffers to pay everyone who claimed they were owed something. A reasonable number of organisations had been promised money without my knowledge. I was the one left to tell these people that there was no sterling left and to apologise for something that was in no way my fault. The messenger definitely got shot on this one. People vented their anger on me with gusto as I was the only one left around.

To make matters worse, I was doing the work of cleaning up the campaign out of the offices of one of the pro-democracy group’s offices, and seeing what they did day to day made clearing up the Yes mess even more insidious. I came in one day to find them all playing a role playing game, one that seemed to be based on Battlestar Galactica. It was played by all of the staff for the duration of the day. I told a few people this story and it did the rounds so completely in Westminster that eventually when Matt D’Ancona interviewed me for his book about the Coalition it had mutated into a tale involving Nick Clegg and people dressed up like Princess Leia. Chinese Whispers are a remarkable phenomenon.