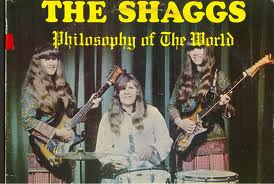 There are two things that are either generally known about the Shaggs, or can at least be easily ascertained by doing a google search of them and avoiding the ones that deal with misspellings of a common British term for having sexual intercourse: one, that Tom Cruise is rumoured to have bought the rights to their story and two, they are quite possibly the worst band of all time.

The Cruise thing seems weird at first, until you realise that they do have some interesting angles to their history. They were comprised of three sisters, Dot, Betty and Helen Wiggin, spurred on completely by their father, Austin Wiggin, a sort of incredibly poor man’s Murry Wilson. He took his daughters out of school, bought them musical instruments, and then drilled them for hours a day to become the world’s next Cowsills. In spite of the results from this experiment not being what an objective observer would describe as even remotely competent, Austin got the girls into the studio to record an album less than a year after they had started playing, the result of which is the monumental Philosophy of the World (1969).

How to describe the sound of this record? It should be noted off the bat that the Shaggs’ music really, really does not sound like any other music ever made, in any genre. It is like the Wiggin sisters had never heard music before and were given instruments and told to approximate what music might sound like. Helen’s drumming is fairly competent – too bad the other two ignore her to the point of wondering if they recorded the drums separately, then didn’t give Dot and Betty them to listen to on the cans while they laid down their tracks. Dot does this incredibly weird thing throughout Philosophy in which she tries to play the melody on her guitar as she sings it, but since her playing is still rudimentary and the guitar isn’t quite in tune, it creates a genuinely eerie effect, haunting almost. Strangely, in spite of everything I’ve just said, the band oddly manage to come together perfectly in places. In the song “Halloween”, there is the general chaos of a Shaggs number, then everyone stops bang on time, sings the line, “Why even Dracula will be there”, and then they all veer off in their own seperate directions again.

The vocals sound as if they are being sung by someone whose first language is not English. In fact, they sound a lot like Shonen Knife, so the accent is almost Japanese. Why this is, I cannot say. The lyrics are all pre-adolescent, despite the girls all being in their late teens when the album was recorded. Things like, “Who are parents? Parents are the ones who really care. Who are parents? Parents are the ones who are always there,” and “If Foot Foot didn’t roam so well, he’d still have a place to dwell.”

Lots of people love them. Frank Zappa once reviewed Philosophy of the World by saying “Better than the Beatles. Even today.” NME put the same record at number 14 on their “101 albums to hear before you die” list. They became the heroes of bands like the Replacements and Half Japanese. But the band has more detractors than bona fide fans. I recall putting the Shaggs on for a friend of mine who is extremely open minded in regards to music. After giving it two minutes he turned to me and said, “This is the worst fucking music I have ever heard in my life.” And he meant it.

The Shaggs managed to record a follow up album, called simply The Shaggs in 1975. It sounds much more conventional than Philosophy, but that wouldn’t be hard. The charm of the group is still there however, with “I Love” one of the most genuinely sweet songs of all time.

The bit that Cruise may have been interested in from a story angle was the fact that Austin, in his pursuit of pop glory, may have abused his three daughters, physically. That makes The Shaggs even more uncomfortable listening and their status as icons of inscrutable art horribly ironic; it’s very likely that instead of making art they were simply trying to please their father enough to stop him from getting angry with them. As such, The Shaggs music also inhabits a unique moral dimension. Is enjoying their bizarre numbers in some way wallowing in the sounds of three teens crying out for help? I think the second album answers that question. They came back to the music, so there must have been some redemption there. And we shouldn’t dislike music just because it is inspired by unhappiness. If so, that’s a large chunk of the pop cannon out the window. However, none of this may be why you’re turned off by The Shaggs. Try “That Little Sports Car” and see what you think.