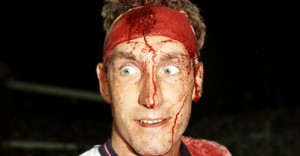 As the entirety of the football following public knows already, earlier this month Sol Campbell brought out an autobiography in which he claimed that had he been white he would have captained England for ten years. This, as could have been foreseen, opened up a huge discussion on racism in English football and whether it has been sufficiently tackled. Thinking about this over the past few weeks, I’ve come to the conclusion that Sol was mistaken. It is not the colour of his skin that denied him the England captaincy. It’s that he’s clearly a nice, non-sociopathic individual and that is not what England expects.

When assessing whether someone should be made captain of the English football team, there are only three main things to consider:

The answer to all of those needs to be “yes” or there will be trouble. The exception that proves the rule was David Beckham. He was none of those things. How was he treated as captain? The supporters would chant about how they hoped his children would get cancer and die. Nice. You only have to compare how England fans reacted when Beckham was sent off in the 1998 World Cup against when Rooney was sent off in 2006. Beckham never entirely escaped the wrath of England supporters for the remainder of his career, despite Simone’s overreaction, Batistuta and the head shake, etc. Meanwhile, Rooney viciously stomps on Carvalho’s groin, intentionally, unprovoked and right in front of the ref. This costs England the match, but the England fans go on to treat Rooney like a hero.

The most perfect England captain ever was Terry Butcher. Even his name was perfect; in a parallel universe, there is a comic creation called Terry Butcher, who is a famous caricature of the stereotypical England captain. Only in our universe, Terry Butcher actually exists. He even passed the third and mostly academic test by having to prove it once, in the infamous 1989 qualifier with Sweden (see picture above). Stuart Pierce was called “psycho” by the fans. John Terry famously mocked American tourists stuck at Heathrow on September 11, 2001. These are the captains that England fans cherish; not the quiet, family man types, or the thoughtful loner mould. It’s easy to see how poor Sol never had a chance given all of that – regardless of how good a footballer he was.