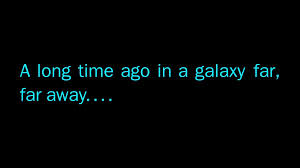 One of the first articles I wrote for this site was a re-imagining of Star Wars, Episode I: The Phantom Menace. Funnily, it’s actually quite painful to have to type out those words, “Phantom Menace”, not out of anything like a “George Lucas ruined my childhood” type vibe, but just because even after having seen the film many more times than any sane person should have (i.e. more than once), I’m still not quite sure exactly what the titular menace is. Little Anni? Sidous? Jar Jar Binks?

Anyhow, I could sit here and make fun of Phantom Menace all day but I’ll spare you. What I’m here to discuss really, is things I have learned from my two year old daughter. Which is remarkably, quite a bit. As you’ll know if you clicked through to my old article, she has come up with the greatest ever critique of Star Wars: Episode I that I have ever heard: “This isn’t Star Wars”.

But exactly why a two year old would offer that critique is actually interesting. What was it that didn’t communicate the idea of Star Wars to her? After a lot of thinking about it (too much thinking, obviously, but I digress), I came up the answer. And it lies in the Star Wars film franchise and its relationship with postmodernism.

Having spoken a little about my extraordinary offspring and George Lucas’ greatest creation, I would like to write a little about postmodernism now, to add some context. It is a much misunderstood term. People tend to confuse it with its polar opposite, modernism. They see something they think is pretentious, recondite, abstruse and they think “That must be postmodern”. Most modern art for instance is well, modern, not postmodern. To boil it down to something easily digestible, modernism is future looking, hopefully, energetic, ambitious towards possibilities. Postmodernism is cynical at its heart. It’s central conceit is that the concept of “newness” is a false one; everything that can be done has been done  already, so fooling yourself into thinking that you can create something “unique” is a folly. To give you an example, by far the most postmodern form of music ever invented is hip hop; it’s based on taking old records and chopping them in a way that creates a song. The most postmodern musical groups of all time are unquestionably the Beastie Boys and Wu-Tang Clan. This is not an insult to hip hop incidentally, just a recognition of what’s what.

Right, so what does this have to do with Star Wars exactly? The original Lucas trilogy of films, made between 1976 and 1983, seem to share some of the basic traits of postmodernism, leading you to possibly think that Star Wars fits the bill. It is, in the end, a pastiche of previously used bits, which George mostly got away with because many of the references were Eastern, thus not familiar to Western audiences. The way C3PO and R2D2 are obvious rips of Tahei and Matashichi from The Hidden Fortress; about half of the films ever produced within Chinese culture have a Yoda and/or an Obi Wan Kenobi figure in them. The Nazi uniforms. The endless The Hero With a Thousand Faces references.

But Star Wars is resoundingly un-postmodern. Part of this is because it misses the crucial element of the strain, namely irony. Star Wars is in no way sarcastic or satirical; it’s so straight faced it’s actually amazing. It’s this quality that made all of the big time directors Lucas was chummy with at the time convinced it was going to flop; the late 70’s was a time of edgy, character based drama, and the cheese that is central to Star Wars made them think it was doomed to fail. Of course, what the De Palma’s and the Scorcese’s failed to realise at the time is that cheese, when done well, always sells, in every era, no matter what. It’s a basic human staple. And doing cheese well means no irony. It has to be earnest, to the last drop. It’s one of the reasons why the Williams’ Wagnerian score is so essential, to the point that the film possibly wouldn’t work without it; Star Wars is meant to be taken at face value.

Also, although Star Wars can feel like a compendium of references to those who know what Lucas is referring to, it’s clear that you aren’t meant to understand them; Lucas was trying to tuck them in on the sly. In other words, the references are less pastiche than blatant rip-off. He doesn’t want you to go, “Hey, this is a lot like the plot of that Kurosawa film!” – Lucas is betting on the fact the fact you haven’t seen any of the Japanese great’s oeuvre, which to be fair, I’m sure few people in Columbus, Ohio in 1977 had.

But bringing this back to the Phantom Menace, to close this all off: the prequels are postmodernism at its lowest ebb. Where all ironic enjoyment of artistic highs of the past have been replaced by cheap sight gags that aren’t even humorous. I guess what I’ve taken almost a thousand words to say, in an overly complex way, is that the Star Wars prequels suck. And almost certainly knew that already. But at least now you know that Wu-Tang Clan are postmodern, a tidbit to be dropped into your next hipster conversation, so possibly not a total waste of your time.