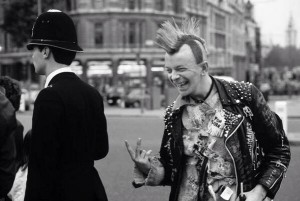 I turned on Channel 4 around 10 PM in order to watch a documentary piece about the leader of UKIP going to have a knees-up with two retired B&B owners in Sandwich. The first thing I heard as I did so was what sounded to me like Nigel Farage saying, “It will always be Great Grimsby”. Turns out this was the preceding programme. I have no idea if the voice I heard was indeed Farage’s (perhaps they were having a sort of “night with Nigel” type thing), but it did make me think for the first time about how mellifluous a voice the man has. You never notice because of the terrible things that come out of his mouth, but Farage could have a career as a voice over artiste should he get tired of hanging around Brussels.

Steph & Dom are apparently two of the people from “Gogglebox”, a show I’ve never seen that involves the television public watching other people watching TV. One got the sense from the early passages of the show that Steph & Dom were meant to be the main draw for most viewers. They were seen, pre-Farage arrival, looking at pictures of Nigel on the internet. “He looks like a frog,” Dom said. There was also an argument between the couple that made you understand that they still love one another. It was kind of sweet.

Then Farage turned up. Dom asked him if he’d ever been to Sandwich previously; Nigel was in the midst of telling him about how he used to play golf nearby when the B&B owner managed to spill beer all over the UKIP man. “I didn’t vote for you because I forgot to,” Dom said, post-beer dousing. Farage was then asked if Europe could be changed. When Farage said no, it can’t, Dom asked him, fairly sensibly, why he bothers being an MEP. Nigel spluttered something semi-incoherent, rambling his way towards, “We did win the European election”. Dom remains unimpressed. “So did the National Front in France.”

Dom takes Farage to his local, where Nige begins complaining about the modern world almost at once. “I don’t drink at the bar anymore – I drink outside! That’s the modern world!” as he gets up to have a fag. He mentions that in Hamburg restaurants still have smoking sections. How this fits in with Farage’s intense Euroscepticism is extremely unclear. The other patrons in the pub look uncomfortable about Farage being there the whole time. Could have just been the cameras that created the atmosphere, but I don’t think so – they seemed genuinely put off by Farage’s moaning.

It all goes downhill from there, with Nigel and Dom getting more and more pissed. Back at the B&B, Nigel discusses his marriages, his kids, his life. It was all enough to make you feel sorry for Farage; there is something distinctly depressing about the bloke, close up. Contracting cancer when he was in his early twenties, his relationship with his children, his misdirected hatred towards the European Union – a monster that has spun out of control and made Nigel stand behind things he never would have a decade ago. Yes, I turned the TV off feeling a little sorry for Farage. And then I reminded myself that he’s trying to ruin the country and snapped out of it.

I close with this question: why the hell did Nigel Farage agree to do this programme? It was never going to do him any favours. Like I said, he mostly came across as a sad old man (and given that he’s only 50, that’s extra-sad). Do UKIP just say yes to every media possibility that comes their way, regardless? Farage is reasonably well known now, so you wouldn’t think that exposure would be such an issue (although I suppose two B&B owners from Sandwich are, according to Channel 4, more famous than Nigel). It’s like UKIP are on a quest to have as many media bellyflops before the general election as possible.