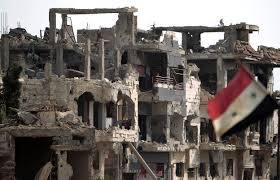 Faisal Mekdad, Syria’s vice foreign minister, has popped up in the western media this week. Talking about how his government, the one commanded by Bashar al-Assad, is the only group capable of stopping ISIS from wreaking havoc. He urged western powers to help the Syrian government defeat the Sunni extremist group – but of course with a few added caveats. “Many countries are approaching us to establish cooperation on security matters. We told all of them that security matters could not be separated from political cooperation.” So in other words, end your war of words with us, get behind Bashar and let’s put an end to these fundamentalist bastards.

Putting aside the obvious and inherent difficulties in Mr Mekdad’s plan, one needs to understand the extent to which ISIS and the al-Assad regime interact with one another at present. They have a strange sort of symbiosis; although theoretically after each other’s demise, they know that in the short term each group actually works to the other’s advantage. For al-Assad, ISIS is an apt demonstration to the West that there are larger evils in the world than his regime. It allows Bashar to play the “war on terror” card, which while not commanding the same paranoia it used to, still gets an ear in Washington. From the ISIS point of view, a Shia oriented, corrupt regime that no one other than Iran and Russia loves is perfect to hold in place for the time being, at least until the caliphate project gets further advanced. A Tunisia style democracy in Syria would mean the end of their goals, at least for the medium term.

Mekdad even felt the need to allude to this in his press release, such is the knowledge in the region that this unholy alliance is carrying on. “I know the rumours,” Mekdad said. “But to those who claim that Syria is not doing its best to combat this group, I answer that if these extremists – Jabhat al-Nusra, the FSA and ISIS – are killing themselves and fighting for more influence and expansion, do you think we are sad? But the Syrian army has its priorities and we shall decide what to do next.” Note how he lumped the FSA, Jabhat al-Nusra and ISIS in together as one. They’re all terrorists according to the Assad regime. Although are some are clearly more terrible than others, at least for the time being.

Problem is, while this rhetoric is theoretically aimed at the West and the US more specifically, al-Assad knows the value of this kind of propaganda within the Middle East. In Syria, Iraq and Iran, the Shia have a power block, and with things set to get only ever more sectarian in the region this is not to be sniffed at. The Assad regime is reaching out to Egypt successfully as well, with a shared dislike of the Muslim Brotherhood the sweetener.

So what should the West do then? There are not many options left. The time for action was last year at the very latest; no intervention is really possible now given how many different interlinking factions have arisen not only in Syria, but Iraq as well. We can but sit back and hope for the best. Sadly, it will almost certainly get worse in the Middle East before it gets better, with a the spectre of a possible third Palestinian intifada to makes matters even hairier.