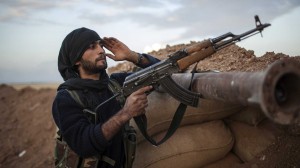 Last week, Iraq’s second largest city, Mosul, a place that holds 1.8 million people and is geographically placed between all of the warring factions in the Middle East, was taken by a group called ISIS. The acronym breaks down as Islamic State of Iraq and Syria and there’s one thing above all that you should know about them: they are too low even for Al Qaeda. The world’s most famous jihadist group has disowned their work repeatedly, describing ISIS’ tactics as barbaric. So that’s where we are with Iraq – one of the most strategically sensitive cities in the whole country is in the hands of people so awful, even those responsible for the 9/11 thinks they are a bit mad.

While I would never go so far as to claim that this is always where everything was headed when the West’s “coalition of the willing” invaded Iraq in 2003, a lot of it is tragically predictable. Iraq has been governed as what amounts to an autocracy over most of the past decade, and worse yet the regime in charge has a distinctly sectarian bent to it. The Sunni minority were ascendant for a long time under Saddam and the Shia majority reasserting itself, often ruthlessly, was not unpredictable. What we’ve seen in Mosul this week is the response to this reassertion of Shia power, the overtaking of a whole major city by a virulent Sunni oriented force. What’s worse is that the void left by the Iraqi army disappearing from the region (many of whose soldiers apparently removed their uniforms and fled the scene), has been filled in by the Kurds, whose quasi-state in northern Iraq Mosul is close to. So whatever happens now, conflict is bedded in for the near future. The gains the Kurds make over the coming weeks and months they will attempt to consolidate and make permanent. A Mexican standoff between Sunnis, Shia and the Kurds possibly awaits, with a make or break mentality setting the tone. As horrible as the scenes in Mosul last week were, it could be about to get a whole lot worse. Particularly with the mess in Syria next door.

Can the West do anything about it? No. When America pulled the last of its troops out of the region, that was a concession of any possible say in what happens to Iraq next. Not that they should have stayed; they shouldn’t have been there in the first place. Syria was the conflict the west should have waited for – and tragically, I believe, would have had 9/11 never occurred.

So watch this space. The Kurds might be able to take Mosul and then come to a deal with Maliki, the Shia Iraqi president. Perhaps having had a major city taken from him might cause Maliki to seek Sunni voices to join his government again, in an effort to get moderate Sunnis in Iraq, i.e. most of them, to at least support whomever stands up to ISIS. But I fear the worst at this point. The worst being literally unimaginable.