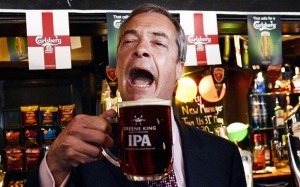 On his LBC programme this week, Farage complained about breast feeding mothers, suggesting they should “perhaps sit in the corner”. I took the comment as Nigel playing to the gallery; his usual attempt to épater la bourgeoisie libéral and try and shore up the white van vote. Fine, that’s his shtick, no real surprise in any of that. But it did make me think that perhaps, just perhaps, Nigel Farage has pushed some of his beer swilling, man o’ the people rubbish too far, and that one day soon he will find that even his core audience tune out. He will jump the shark; find that what once endeared him to those who lapped up his routine now turn away in embarrassment as he becomes a national laughing stock.

The reason I believe this is closer than you might think to occurring comes down to human psychology: you can only be so boorish until people start to become annoyed with it. We always hear about how in touch with the common man Farage is, but putting aside the often trotted out fact that he’s actually a middle class banker, his attitudes to most things, at least those he displays when acting within his political persona, are actually shockingly retrograde. UKIP are always discussed as this emergent, ground-ready force in British politics and yet they seem to be facing the same problem as the Tories only worse: their core audience are pensioners. Now, the older vote is worth holding onto if you have it because the older you are, the more likely you are to vote. However, if you have a ten year plan to get through, building it upon a group of people who are statistically unlikely to be alive, or at least mobile when that timeframe elapses doesn’t strike me as intelligent planning.

I know for many, Farage’s comments about breast feeding mothers will come across as refreshing honesty; just Nigel telling it how it really is. But do that many people really think like Nigel Farage when it really comes down to it? People are drinking less; smoking far less; the attitudes towards women voiced by leading UKIPers is way out of whack with even the least enlightened society in this country. Now someone’s going to tell me that all of that may be true of the urban middle class and not of working or lower middle-class people. I think they’re wrong about that. I only think these trends are happening amongst those socio-economic groups slower and with younger age ranges. So in other words, it’s a hiding to nowhere, eventually.

I could be way off on the proximity of Farage’s shark leaping moment, who knows; plenty of UKIPers will no doubt be telling me later on today just how incorrect I am. However, chatty pub bores are a lot of laughs when you are four pints into an evening, but a lot less fun when you see them hungover the following day. And those without much of substance to say but like talking a lot usually get old eventually, even amongst those who bought in hardest and deepest to begin with.