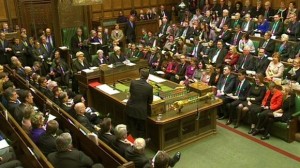 The Hansard Society has made some recommendations around how to improve perceptions of Prime Minister’s Questions in a new report entitled Tuned in or Turned off? Public attitudes to Prime Minister’s Questions. Also, how to get more people outside of the Westminster bubble to watch the bloody thing every week. I like some of the Hansard’s suggestions, which I’ll go over in a moment. I’m also glad they’ve done the report; the issue of the public disengaging from the event that is supposed to hold the government to account every week is worrying for democracy. But I don’t think, in the end, that they are really the answers to the problems facing PMQS.

For a start, it is quite clearly demonstrated in the paper that the Great British Public has some major problems with the weekly grudge match in the Commons. My favourite quote from one of the participants in the focus groups was “great for tourists. Crap for the country”. A large number of people view it as lame theatre, panto, a bunch of children throwing their toys from their prams. The tendency to see PMQS as irrelevant also gets higher the lower down the age brackets you go (68% of those aged 65 or over claimed to have seen PMQS in the last year; that figure falls to 35% for the 18 – 24s). The Hansard report recommends moving PMQS to an evening slot, preferably on a Tuesday or a Wednesday. Another suggestion is that citizens should be invited once a month to submit questions that would then be posed to the Prime Minister (how these would be picked and who within the House would put them forward I’m unclear on). I like both of these and think they are sensible, apart from my questions around the implementablity of the second reform.

Other ideas I’m less keen on. There is the suggestion of a “sin bin” option given to the Speaker to eject MPs from the chamber for “disorderly conduct”. I shudder to think what Bercow would do with that sort of power at his disposal. Also, how would this disorderly behaviour be defined? Hansard also thinks that the number of questions the Leader of the Opposition gets to ask should be lowered in order to free up questions for the bankbenchers. The latter suggestion I really don’t like. Surely the main point of PMQS is to offer the chance for the official opposition to hold the government to account? How would lessening their ability to do that improve things?

One of the interesting things the Hansard Society had the focus groups do was first watch PMQS followed by a Liaison Committee meeting. The groups seemed to react much more positively to this model than the PMQS, finding them more grown up and informative (however, they seemed to really dislike the Select Committee meeting they were exposed to afterwards; as someone who has sat through more than a few of those, I could relate). While I’m sure they were all telling the truth on the day, I don’t actually think deep down people would want to lose the adversarial nature of PMQS. This dovetails nicely with the fact that a less partisan version of PMQS would be much less effective in holding the executive to account. Prime Minister’s Questions are the one chance the opposition gets to take on the government in a public forum; it needs to have some bite to it. Still, I sympathise with the desire to see the end of the childish screaming from all sides of the chamber. It would indeed be nice to see PMQS grow up a bit. However, I don’t see that happening any time soon, Hansard recommendations put in place or ignored, because it would require both the Prime Minister and the Leader of the Opposition of any given time to not only agree between them a new set of rules and get all of their MPs to agree to said rules, but to then scrupulously follow them and indeed to censure anyone who ignored the new regime. The Speaker of the House having a sin bin at his disposal won’t help in this; one can even see it as a badge of pride, MPs intentional getting sent there to demonstrate their “desire to have the voice of their constituents heard”, despite whatever the Rt Hon Bercow has to say on the matter.

I’m sure the Liaison Committee meetings, or whatever the equivalent of them are, in North Korea are extremely civilised, the odd participant being made an unperson aside. But I’m also pretty certain that they are terrible at holding the government to account. PMQS may have its considerable faults, but until we come up anything better they remain important to the health of democracy in Britain.