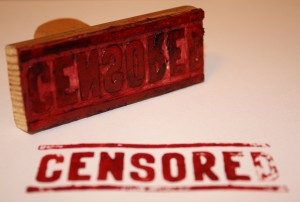 Trey Parker and Matt Stone, the creators of South Park, were once asked if there was any ethnic, religious or national category that they would make off-limits to their satire; whether any group was too taboo to make fun of. They said no, and their answer as to why was brilliant: because if they made one conglomerate immune to their ridicule, it would make the choice of all of the other jibes they had made retroactively suspect. If you make fun of everyone equally, fine; when you start making distinctions, it can begin to feel like racism or religious persecution very quickly given who you’ve included and precluded.

The Audiovisual Media Service Regulations 2014, which came into effect on December 1st, reminded me of Parker and Stone’s answer. As it is a statutory instrument it received pretty much no scrutiny and did not need to be voted on by parliament. The essence of the instrument is that it bans from sale in the UK any R18 product which features a list of sexual acts, one of which is female ejaculation. As a result of this set of guidelines being foisted upon us without recourse to parliament, there will be a protest held outside parliament tomorrow. It is being organised by someone named Charlotte Rose who has asked:

“A man is allowed to put his penis in a woman’s mouth and choke her, but a woman is not allowed to ejaculate. How sexist is that?”

Whether you agree with Ms Rose or not on whether such a ban involves chauvinism, I am cheering on those who will gather tomorrow because I don’t believe that statutory instruments should have such range. That if we are talking about something that involves some sort of community standards being applied, then the community, or the closest thing we have to it in a large representative democracy, the Houses of Parliament, should be consulted on such matters. Because as Charlotte Rose points out, and with the creators of South Park in mind, once you ban a certain group of acts being allowed to be viewed it calls into question all of the other sexual activity you have and haven’t banned previously.