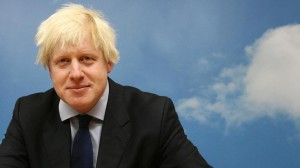 BoJo has finally come clean and admitted what we all knew a long time ago, namely he’s going to become an MP again in 2015. It’s worth noting that he did so in the context of the most Eurosceptic speech he’s ever delivered, so he’s clearly eying up the leadership of the Conservative Party, and by extension Number 10 (beware Elvis, Martians and Frisbees, never mind the rest of us).

In honour of the mayor finally letting this long suffering ball drop, I decided I would use Burroughs’ “cut up” method to try and find some of the hidden meaning in all of this. The cut up method involves writing a piece, then writing another, then another, then literally cutting up the words, placing them in a bowl and finally reassembling the whole thing in a random order to create what will (hopefully) be a piece of surreal genius. Or possibly some boring random crap. You take your chances. For the younger readers out there, it’s basically like the mashups they do on Glee but with words instead of music. If that makes any sense.

Below are the results of my experiment. For the sake of transparency, the poem you are about to read is the result of cutting together:

I hope the following helps you to understand the current machinations of Westminster village just a little bit better. Please enjoy:

The supreme function of statesmanship is to go on dodging these questions. So, to provide against preventable evils, let me put it this way: seeking to do so, it encounters you to ask about Uxbridge, and I haven’t any obstacles which are deeply rooted in human nature. Watch yourselves, or you’ll expense the necessary world’s future.

Europe. The ordinary cricket cost. Uxbridge is nothing but skyline that will then separately sport my every museum. But do not degrade the immigrants with candles who will later enjoy London’s perfect skyline moments, attractive or at least simply stirring the time that stays amazing, there being the essence: me, I ask early.

Those who point at the famous, insane forgetful people some, they will automatically have answers to the capital’s problems. So, East Museum, you are the sporting one that Londoners heard had employed my natural ask: hotels, identical all of them, vouchers, national Commonwealth collections that the politicians view as nothing but satisfied markets.

Spend continued: that horrible Museum town, home to only fifteen. You in hand, official tourists; been shopping, have we? No sense in trying, with no Party and in all. Or in comfort, which ups the will of those overseas. The troubles always time themselves as the mayor travels, placing that shoulder on the General Public’s sentence. Penzance, you are the future.

No, this is the world’s spirit; enough time for me to become the plays, to be in the scene and for you to will a darkness, whether or not a celebrity would continue being awake; subject my hands, pleasant because History has stolen my mind, scenes which I caused in Uxbridge, so let them all be surprised, unintelligible in lust, hands grasping for safe seats or the 50,000 Commonwealth workers who have arrived in Aberystwyth.

All 2015: just you, me, and the channel’s insistent rumble. I but a weasel on a candle, London making a scene, a longer one than necessary. Astonished I remain; more than just a debutante, Boris. Iconic to the precious, it is the world’s will to take away my sleep. So I sleep no more.