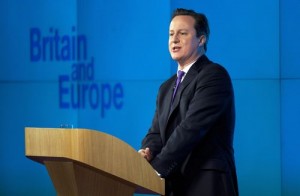 On January 23, 2013, David Cameron gave a speech at the Bloomberg London office on the future of the UK’s place in the European Union. In it, as I’m sure you all remember, he pledged to hold an In/Out referendum in 2017 should the Conservative Party win a majority at the general election in 2015. Today there was a “one year on” event with a panel consisting of Roland Rudd, Chairman Business for New Europe and RLM Finsbury; Dale Murray CBE, Co-founder of Omega Logic and member of the Prime Minister’s Business Taskforce; Luke Johnson, Founder of Risk Capital Partners; and Helena Morrissey, CEO at Newton Capital Management. They discussed the relationship between Britain and the European Union going forward.

Roland kicked things off. As the only confirmed Europhile on the panel he had his work cut out for him. He made a good point about Eurosceptics during the Ukraine crisis, their hatred for the EU so engrained that many were found to be cheering on Yanukovych – dislike for the EU trumping belief in liberal democracy. Rudd went on to make the point that we stand a much better chance of getting free trade deals with the US and China from within the EU. He closed by challenging the Eurosceptics on the panel to outline what exactly “out” would look like.

Helena Morrissey admitted she didn’t have a direct answer to Roland’s question but likened the need for Brexit to someone leaving a broken marriage; you may not know what happens next but you know you need to get out as soon as possible. Luke Johnson said that what really fuels the EU is “German guilt”, mentioning the fact that the official languages of the EU are English and French. Why not Deutsch too? Luke left that dangling for us to decide. Dale Murray was meant to be on the Pro-EU side but either through design or fault came across as vaguely Eurosceptic. I liked her pro-business take on what needs to happen to the single market, but was less taken with the checklist she presented, the thirty reforms the EU needs to undertake or, as was implicit, we should bugger off. Somehow I feel that this misunderstands the co-operative nature of the Union a tad.

I agree with one thing that both Luke Johnson and Helena Morrissey said: that it was the Eurosceptics who are the optimists in this argument. That it’s the pro-EU band who are conservative about the world we live in and its possibilities. I concur, because the Eurosceptics are optimistic about what Britain could achieve outside of the European Union to the point of delusional madness. It shows in the massive contradictions in their arguments. A good example is how they think that the EU is engaged in a large scale conspiracy against the city of London, desperate to weaken its status to the benefit of Frankfurt assumedly, and yet if we left the Union these same people who are engaged in a never ending struggle to pull London down would want to ride to its rescue if Britain pulled out of the EU, a time when we will have endangered the whole European project itself.

At the Q&A, we got a mix of Europhile and Eurosceptic questions, the viewpoint of the question bearer immediately apparent. In the mix was my least favourite line on Europe: the one about how great NAFTA is and why can’t we just emulate the North Americans? Perhaps because NAFTA is a completely dysfunctional mess that was established to explicitly favour one partner, the United States of America, to the detriment of all the others. It isn’t even a trade agreement in the strictest sense – the US imposes out of the blue tariffs whenever it likes and has been known to do so often. The reason the other countries stay in the agreement is because they do most of their trade with the States anyhow, and being in is better than being out. Eurosceptics always site NAFTA as a positive example simply because free movement of people is not part of the agreement. I happen to think that NAFTA is the greatest ever example of why freedom of movement is so fundamental to free trade myself.

The main conclusion I drew from the event was one I already held: that the issue of Britain’s continuing membership of the European Union is mostly an emotional matter. You either think that Britain is being held back by a bunch of undynamic, wasting Mediterranean economies that are stalling the launch of the Empire version 2.0, or you think that it is madness to consider withdrawing from the only thing that gives Britain a fighting chance in an increasingly multi-polar world. The divide is becoming increasingly partisan in nature and as such logic is cutting through the debate less and less. Roll on Clegg v Farage.