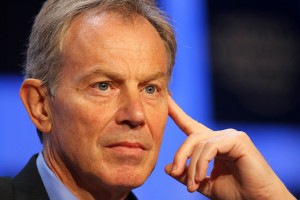 Blair is on one of his very occasional visits to these fair isles, this time round to give a speech at Bloomberg about the threat of radical Islam. In the oration, he said he thinks western governments need to “elevate the issue of religious extremism to the top of the agenda”. I don’t really see how that hasn’t been the case already for the last decade and a half, but there you go. So far, nothing new; this has been Tony Blair’s standard shtick for some time now. It was what he said further along that interested me. He talked about how radical Islam was such a threat to world peace that co-operation with other countries was paramount. In particular, Russia and China, regardless of “differences”.

So to summarise, radical Islam is so critical a menace the west should stop chastising Russia about what it is doing in Ukraine and instead let them do whatever they like there in return for Putin’s continuing support for the “war on terror”. Let’s evaluate the monumentally flawed argument here, shall we?

In 1999, Tony Blair gave a speech in Chicago in which he laid down the “Blair doctrine” (you’re not a politician of note in the 21st century if you don’t have your name attached to a doctrine, it seems). He laid down five guiding principles as to when liberal intervention should be used (sufficed to say that none of them applied to Iraq). I shan’t bore you by listing them here, but instead summarise what I think the real Blair doctrine on intervention is and has always been:

So therefore, according to Blair, radical Islam is the only possible problem facing the globe and as such every other issue should be ignored. Through this logic, every country can be brought into line through dialogue (because of course, the threat of radical Islam is so readily apparent to every player on the world stage, who would resist?). Whatever Putin is planning in Eastern Europe is nothing important, really, and we should stop squabbling with him and start doing, well, I’m not quite sure what. Blair wasn’t terribly specific on this point. He did say that the west “will pay a very heavy price” for not intervening in Syria. Guess what, Tone, we already have. In Ukraine, of all places, as fate would have it. It’s Russia that is propping up the Assad regime and it was our backing down from confronting him on this that at least partially gave him the courage to pursue his aims in Ukraine. You see now, Tony? How everything in the world of foreign affairs is connected and doesn’t come down to glib, George W Bush simplicities such as announcing that the only threat to global unity is radical Islam?

Religious fundamentalism, in all forms, is a real threat to liberal democracy in the 21st century and we should be vigilant against it. But definitely not at the expense of undervaluing in the extreme all of the world’s other problems. It’s not 2002 anymore, Blair, however you might wish that it was. And I don’t think this rubbish was anymore correct then, just for the record.