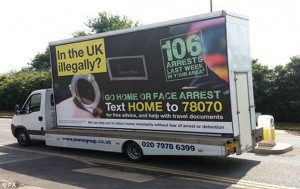 Over the weekend, both Cameron and Boris said some things in the media around immigration. Cameron sounded like he was trying to talk to two different audiences at once. That’s because he was. He said that Britain should not put up barriers to EU migrants coming here to work, that freedom of movement was important. But then he fell over himself qualifying this statement. And said that an In/Out referendum was of paramount importance and that if Europe wouldn’t listen to his demands post-2015, he may campaign for a No vote in said plebiscite.

Boris was much more outwardly positive. “I am the only British politician who will admit to being pro-immigration”, said the mayor. Putting aside any arguments I could make about the validity of this statement (Nick Clegg and Mike Gapes immediately spring to mind as spoilers), it was a ballsy thing for a Tory politician to say. Until you read the fine print. He believes in amnesty for illegal immigrants who’ve been here for an appreciable amount of time but wants the government to remain “tough on illegal immigration”. In summary, great portions of what Boris said was contradictory. That’s because Boris was addressing two different audiences simultaneously as well.

The two audiences in question are one, a pro-market, socially liberal, mostly urban group that Cameron has deliberately targeted since become leader in 2005; and two, the socially conservative, anti-immigrant base that the Tories are terrified of losing lock, stock and barrel to UKIP. What you see in the statements of the leader of the party and his heir apparent are the problems associated with trying to speak to these two sets of people at once. Because these two groups of people believe in the exact opposite things.

The base isn’t even all that free market, as things like Red Tory demonstrate. A lot of them are fine with a big state – so long as an appreciable chunk of the proceeds go to them in the form of pensions or agricultural subsidies. And perhaps prop up the CoE and/or try and create a society in which the advance of liberal values can be halted. So again, the neoliberals and the swivel eyed disagree on everything, basically.

The Conservatives could be saying all sorts of things to appeal to the first group of people but do not, as they are too scared of losing a significant portion of the second group. A good example of this is the great number of French entrepreneurs who live in Britain. This could easily be used by the Tories as an example of the free market at its best, neoliberalism in its best light. The leftie French, the narrative would go, have created a socialist nightmare in which young, ambitious people are told to wait their turn. The pluckiest of the bunch think they’d much rather try their luck on the other side of the Channel, where the barriers to entry in key industries is much lower. This, the Tories could say, demonstrates the superiority of the Anglo-Saxon model and shows how a freer economy can be an equaliser by allowing people to help themselves.

Only of course, no Conservative Party leader would ever say such a thing. For a start, talking about the French in a positive light, even while doing down their economic model, would be a step too far for the Tories to take. Also, being that explicitly pro-immigration isn’t something they feel comfortable with either. At Conservative Party conference a couple of years ago, a journalist who was on a panel said that Cameron needed to define himself more, to tell the people of Britain what he was all about. The activist types murmured their approval. Which stopped dead when said journalist said that the Tories should support things they aren’t usually known for, such as more immigration. You could hear a pin drop. It’s deep in the soul of the party that immigration, positive effects for the economy and the Anglo-Saxon model being proven correct or not, is a bad thing.

Cameron had a choice when he went into coalition with the Lib Dems, one that at the time I thought he’d take. He could take the party in a pro-EU direction, placating the right with the idea that ripping up all of Britain’s bilateral treaties is hardly a conservative thing to do. He could have drawn a line in the sand, saying that Britain was an open, non-racist, non-homophobic country and that the Conservative Party needed to accept this all down the line, in a similar way to when the NHS had to be accepted as part of the terrain when the Tories got back into power after the Atlee government fell.

Instead, he’s tried to play to both galleries. He brought forward legislation on equal marriage, but then squirmed about it, didn’t whip the vote and ended up with most of his MPs voting against it. He’s promised a referendum on Europe, then said he’d renegotiate “Britain’s deal” and campaign to keep us in, but has now said he’s not so sure about the whole staying in idea. As a result of all this, he’s gained none of the liberals he was after and continues bleeding support from the base to UKIP. In other words, he’s satisfied neither side. Perhaps the nature of general elections will save him come 2015, but probably not enough to get that majority is supposedly craves.