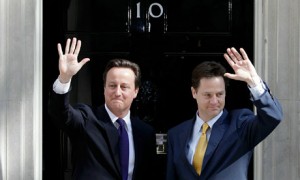 There was a fascinating article in the Daily Mail yesterday. The top line was Cameron saying he won’t do a deal with UKIP under any circumstances after the next election, no matter what. Well, Cameron didn’t exactly say it; rather a “Downing Street aid” did. Anyhow, it all seems to have been done with the Prime Minister’s blessing, so we can assume that he wants to get the message out there. He is also aiming to do down the idea that the Tories could do another deal with the Lib Dems. Minority government is voiced to be the preferred option in the event of another hung parliament.

To some degree, I understand Cameron’s willy-waving, I shan’t compromise under any circumstances stance. He’s seen Farage rise to adulation for some and infamy for others on the back of a similar, I Don’t Take Any Shit front. But in an age of fracturing party politics, it could all seem very stupid come May 2015. Particularly given I don’t see how the EU referendum happens without the Tories doing a coalition deal with someone.

Perhaps if UKIP end up with enough seats for a Tory-UKIP coalition, Cameron wouldn’t have to form a coalition with UKIP on the assumption that they would support a Bill calling for an EU referendum. Strangely enough, that might not be the case. Obviously UKIP want an EU referendum, but they seem displeased with Cameron’s proposed 2017 timing. Farage was quoted as saying he would support a Tory government so long as there was a “swift” referendum on Europe. Farage defined “swift” as July 2015. So two months after the general election. There are many amazing things about this quote, so I’ll try and limit myself only to the most mind-blowing amongst them.

For a start, just legislating for the thing would take longer than that. But putting that very important consideration aside, Farage seriously wants a campaign that lasts in total, at most, a handful of weeks? Does he seriously think that such an important decision for the country to make should be handled so cursorily? For a guy who spends his whole life obsessing about referenda, he seems to know very little about them.

Anyhow all of this is academic because UKIP aren’t going to hold the balance of power after May 2015. They will have a handful of seats at most – South Thanet increasingly looking to not be amongst them. The most likely scenario, should Cameron find himself at the head of the largest party in a hung parliament again, is minority v another Con-Lib coalition. If the Lib Dems are the only way to get the EU referendum he needs to hang-on to both his premiership and the leadership of his party, do you really think he’ll throw that away? I severely doubt it.