I’m really, really glad I’ve been to Montenegro. For a start, it is a visually incredible place, the mountains against the sea even more stark than in neighbouring Croatia. On a personal level, my general anxiety level decreased massively over the four days I spent in the country. However, first impressions of the place were slightly ropey. For a start, we had hoped more restaurants would be open in April as compared to its EU cousin, only to pick one that seemed to be hosting some sort of Balkans Mafioso convention. We went to an adjacent playground, only to find this: 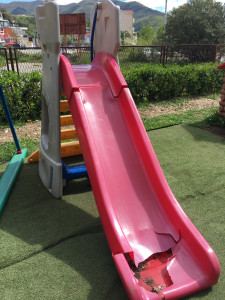 We were at this stage wondering if we’d made the right move in crossing the border.

Thankfully, I can say that everywhere we went after that playground in Montenegro was amazing. Budva was gorgeous, particularly when filled with only locals as opposed to wealthy Russians (as is apparently the case when things are “in season”). Kotor was even better. Climbing up to the monastery (can’t believe we convinced the kids) was exhilarating and highly recommended. The final day, we managed to find one of the best beaches I have ever been to, anywhere in the world. The sea was a swimmable temperature as well. Only problem was the high preponderance of rubbish everywhere combined with the fact that all of the restaurants and cafes adjacent were shut (obviously). The places to eat throughout Montenegro that were open, however, were worth noting – the best sandwich I’ve ever had in my life I consumed on this trip. It was at an Aussie theme bar called Harbour Bay in Kotor. The beef sandwich; try it if you end up in that neck of the woods.

The drive from Montenegro into Bosnia was worth interesting. Over the mountains we went, with mostly decent roads – weirdly until we were about five miles from the Bosnian border and then it was sub-Saharan African terrible. Why? Who knows. Then when we crossed into BiH, the first sign that welcomes you tells you are welcome to the “Republic of Srpska”. A lot of Balkan history came flooding back to me.

Srpska has a lot of Serbian flags everywhere, at least the bit we were in. It was soon after we left the quasi republic that the first mosque appeared. It was a noteworthy contrast.

Mostar was, weirdly, the most obnoxiously touristy place we visited on the whole tour. I’m still glad I went, and the bridge is worth seeing, but man, the streets were crowded with visitors (I can’t imagine what it’s like in the summer). We couldn’t stay long since the kids would have bankrupted us in regards to trinkets.

Sarajevo I really loved. Shorthand for what it’s like, picture Hoxton with mosques. Very laid-back, very hipster vibe. Loved the split between the Austrian feeling bit and the Turkish bit. Food is excellent (best of anywhere we ate, baring possibly that sandwich in Kotor) and very cheap. In fact, it was astounding how inexpensive Sarajevo was as compared to almost anywhere we’d been in Croatia and Montenegro. Sarajevo is the one place we went that I would have liked to have spent more time in than we did.

The drive back to Croatia for the flight home was stunning. The mountains in the middle of Bosnia are worth raving about.

I feel saddened for Bosnia and Hercogovina, however. That Montenegro should be much further on in EU accession talks seems unfair. It’s obviously down to the legacy of the war, including the whole Srpska thing, but that makes the whole thing worse. The place suffers the worst of anywhere in the former Yugoslavia in the war and is still being made to pay for it? And believe me, EU accession is a very, very big deal in the Balkans: all of the licence plates are formatted exactly like the EU licence plates, with the notable exception of a blank space where the circle of stars will one day – hopefully – lie. You can imagine some of the Brexit related conversations I had as a result.

Coming back to Split airport seemed surreal after all of that. In conclusion, I would definitely recommend a trip to the Balkans. But do it in June instead. And double check with where you’re staying that the pool won’t be empty when you arrive. Don’t miss the beef sandwich in Kotor while you’re at it.