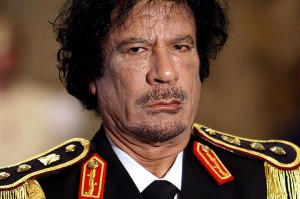 I don’t know what it is about UKIP, but for a party that sees itself as being defenders of all things free and British they really do have a thing for despotic autocrats. Take Mark Reckless, the soon to be the Indie Party’s second Member of Parliament, and his recent contribution to the immigration debate in Britain:

“Whatever people say about Gaddafi, one thing is he didn’t allow those boats to come across.”

Farage backed his boy up, saying “of course” he agreed, with at least a caveat thrown in that Gaddafi was indeed an “Arab nationalist dictator”. This quote from Reckless is the latest in a long, historic line of quips from various individuals about vile tyrants, bon mots that have passed from the lips of people who should have known a lot better.

“Say what you will about Hitler/Stalin/Mussolini, at least he….(insert positive trait here)”.

This charming comment from Rochester’s finest comes as an academic report on immigration, produced by UCL, lands on the laps of a country in the midst of an irrational froth on the subject. The results make for difficult reading for just about everyone. The report did a cost/benefit analysis on immigrants coming to Britain over a 17 year period. It found that while immigrants from outside of the EU were a net drain on the public coffers to the tune of around £120 billion across that stretch of time, EU immigrants to Britain were actually a net positive to British taxpayers, paying in almost four and a half billion pounds more than they took out.

Migration Watch struggled with the findings, as it was positive for them in some respects and against their narrative in other ways. They said that the results of the study proved what they had been saying for years, but of course:

“As for recent European migrants, even on the authors’ own figures – which we dispute – their contribution to the Exchequer amounts to less than £1 a week per head of population.”

In other words, the stuff we like and serves our purposes is all completely true, but the stuff about EU immigration being economically positive is to be “disputed”. Every campaigning organisation does exactly the same thing, so I don’t wish to carp too much, but it is highly amusing watching it unfold.

The one thing I agree with Nigel Farage about, at least in theory (although in his other words and actions he tends to negate this thought) is that this country does need a more grown up conversation about immigration. Chances are it will increase as parts of the world become more unstable in the coming years, and we need to think about how that is handled in a way that is both humane, manageable and works for the country as a whole. We also need to think about our aging population, and how young immigrants coming to Britain might actually be necessary sometime in the not too distant future.

So yes, I welcome a more mature debate on immigration in the UK. I’d probably start by calling a halt to childish positive appraisals of people like Gaddafi. I disagree with many of the things Mark Reckless believes in, but surely we both prize our liberal, British traditions. Thus, using those who have been enemies of democracy as role models is no way to have this all important conversation.