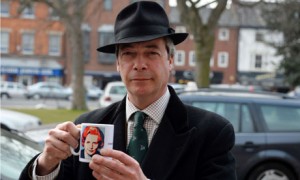 I wrote an article yesterday about the Farage-Le Pen spat. I got some interesting comments back on the piece – one person pointed out, validly, that UKIP are in the EFD in the European Parliament and are not amongst the Non-Inscrits as I had said. All right, bad me, but can you blame me really? The EFD are such a rabble you could be forgiven for thinking they are just an extension of the unaffiliated nuttery. Another commenter said that it was unfair to brand UKIP as a party of the far right. Isn’t Farage just an old school Tory after all? My answer to this is no. UKIP are quite definitively a party of the far right. But in order to qualify this statement, I need to define terms.

This is an important debate to have in the wake of UKIP’s attempts to appeal to wayward Labour voters. Farage tried often to use Labour friendly language during the Nick v Nigel debates, talking down austerity measures. The new billboard campaign (that has generated the debate it was hoping to) is clearly built on trying to appeal to disaffected working class voters. Yet this is all extremely hypocritical of UKIP given their economic policies. The cuts we’ve seen under the Coalition are practically the moves of hardened socialists compared with what the last UKIP manifesto wanted to impose on the nation. A flat tax to be applied, for instance. Remember how upset the left got about the top rate coming down from 50 to 45 percent? Try 31 percent on for size. Or a pledge to reduce the public sector to “1997 size” – which if taken literally would cost the public sector two million jobs at the very least. So if looked at economically, UKIP are very, very hard right. This idea that Farage is just some old fashioned, pre-Cameroon Tory is rubbish. Wet our Nigel certainly is not. He is much more radically right wing on economic matters than even the most right wing Tories on the backbenches. UKIP are also anti-immigration and socially conservative, the latter demonstrated during the internal debate about equal marriage. So again, far right seems to fit here.

And yet, as I say, Farage knows that the votes he’s chasing this May are going to come from the left. So he plays this all down. For now at least – I hardly think Mr Farage has suddenly converted to socialism, or even One Nation Conservatism. He’s a dyed in the wool Thatcherite and has never worked hard to obscure this fact (see picture above). The idea that he doesn’t agree with the Coalition’s economic policy rings true – he would have cut far more, deeper and wider and quicker. So vote however your heart tells you come May 22nd, but please don’t think UKIP are anything other than a product of the far right.